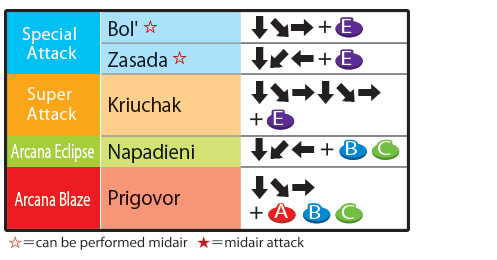 "I'll eradicate every trace of evil in this world!" Sorwat, the Sin Arcana is a meta-existence that is the complete opposite of Koshmar, the Punishment Arcana. Sorwat made a contract with Clarice, whose life teetered on the scales of life and death, to prolong her life.

Sin buffs most characters zoning capabilities considerably between it's variety of sinball formations and traps. Good for both playstyles where you are trying to turtle it up or force your way in. A sin trap on a downed opponent in the corner can also leave them at a complete loss of options. Sin is also good for making comebacks due to its EF effect.

Sins main weakness is that sinballs can be deflected, making it a bad choice against characters who can deflect them easily such as Scharlachrot.

Red - Your charged E attacks will become a special projectile. You reel back upon using the move, making it hard for the opponent to counter attack you. However, it does add 10 more frames of start up to your charge E moves. Takes a while, but its hitbox is really big.

Patience - Whenever you use your fully charged E moves or other Arcana moves, you will take damage.

Victim - During EF, the less health you have, the greater your attack power will be increased during this time. In reality what is happening is that your current Guts level is being added to your attack power. So, since everyone's Guts starting points and maximum values change, the damage during this between all characters changes vastly. For example Akane, who has high Guts, will benefit greatly from this. This also means that Scharl, who has negative guts, will lose attack power from this.

E
Sin ballz. Can be done on the ground or in the air. This will cause your character to release a large orb into the air. The orb will drift around slowly in a random path. It stays out for a long time and will change trajectory twice, once every 55 frames. Since it lasts for a good while it's nice to leave out, but don't rely on it too much since it moves in completely random paths.

Sinballs are a step up from loveballs, and will simply eat loveballs along with other smaller projectiles.

E
Sorwat's tail does a three hit tail stab. This is air unblockable, but difficult to use for this purpose as it's somewhat slow. If you do manage to land this via a tech trap or something, it has a lot of untechable time so you should be able to follow up easily.

E
This will set a pinwheel shaped trap. It is transparent so it's somewhat hard to see and remains out for 300 frames. You can set up to three of them out at the same time. When the opponent hits the trap, it will expand to attack them. These traps can be a fair nuisance to your opponent.

E
Sends out four Pain orbs at the same time. They have the same properties as the normal version, but they do not travel very far from you. This can be a pretty good zoning tool for characters that lack projectiles.

This version puts out 2 sets of 2 orbs in front of you that move forward very fast. Good for moving in from far away, but not when the opponent is nearby.

E
This is just the air version of the above arcana super, although the orbs in this version drift farther apart from each other.

This version puts out 4 orbs around you in a box then they slowly float forward. Makes you really hard to approach and also is good for moving in from closer distances.

Judgment - Sorwat's tail suddenly rises from the ground right under your opponent. This attack is air unblockable and carries the opponent to the rest of the Arcana Blaze. Sorwat waits where the tail pierces them and skewers them from all sides. Judgement has very fast startup for an Arcana Blaze and is super easy to hit confirm into, making it a great Blaze for the final confirm to finish off your opponent.

This blaze also has very fast startup, meaning you can use it to punish recklessness from full screen if the opponent is unable to homing cancel on reaction to superflash, or are in the corner. Since this is air unblockable you can reset into it on cornered opponents as well. Midscreen it can be 4D'd for free.