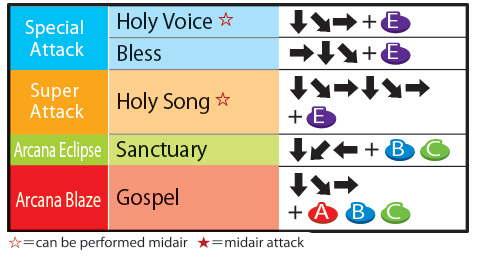 Zillael is a winged unicorn. He took residence in a small forest in Great Britain and was a highly revered meta-existance. He only lends his powers to the ever proud, sacred maiden Petra.

Crusade - This will reduce the amount of time it takes to charge your E moves. It does not decrease it enough to really be noticeable to be honest...

Baptism - This will activate whenever you take damage. 0.125% (...) of the damage you take becomes recoverable with Holy Land.

Holy Land - This will convert the damage you saved up due to Baptism back into your own health. Sounds great, it'd be like you're playing Melty again. Unfortunately you don't restore nearly enough for it to be worth counting on. Even if you went though an entire match without using EF, you'd only regain about a random hit's worth of health. The Sacred arcana really lowers your health too... this has to be some kind of mistake on EXAMU's part...

E
This will fire a shockwave straight in front of you. Wallslams on hit and is usable in the air. The start-up is decent so it's easy to incorporate into combos. The hitbox is pretty good, so you could space with it every once in a while.

E
This will shoot a spear of light straight forward. You can use it in air too. The spear will hang in the air a bit before shooting forward. The start-up is slow, but it's an "ok" just-do-it-because-I-have-a-free-moment zoning tool.

E
This increases your attack power by 5% and reduces the damage on the next hit you take by 50%. This last for 8 seconds (480F).

E
The super version of Holy Voice. Works in the air. Has essentially the same uses as the normal version, but this is much faster and does pretty good damage. Good for combos or guaranteed counters.

E
The super version of Javelin. This sends out 6 arrows of light.

Gospel - Zillael fires light from all directions. This covers a mid to long range of area. It's fairly fast but there is no invincibility, if you take damage before it, it won't come out.