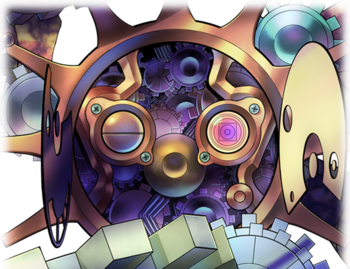 An ancient clock that has somehow evolved into an Arcana, its powers allow Kamui to manipulate space and time. It lends its powers to those dedicated to maintaining the balance between the spiritual and material worlds, keeping them alive for eternity.

Backdashes are invulnerable from frame 1, and the clone is active from frames 2-24. While this may seem like a large window, attacks that are in range to hit both you and the backdash clone will hit you and ignore the clone if you are not invulnerable. This means you should still try to time your backdashes well.

Time's 6D will always take one bar, even if you do this at neutral. If you use this as a homing cancel, you have to change your combos to Time Arcana specific ones because of the fixed distance you move during it.

Keep in mind that while the opponent has to block the double correctly, the double's attacks are not air unblockable and won't have a guard crush effect. This move is usually used in cooperation with Infinite Light to create powerful mixups. The time it takes to charge this move, and the time it takes to release this move is based on the properties of your character's E attacks.

Overall, this is probably the best special EF effect in the game. It gives you more combo options for EFC combos that may not even work with any other arcana. But more importantly, any pressure or mixups that you do while in EF is probably completely unreactable. Between these two things, it's normally not worth bursting with Time unless you really need to.