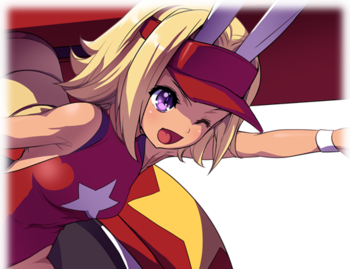 A third generation Japanese-American, Catherine's grandmother was from Osaka, which explains why someone with platinum-blond hair and blue eyes speaks exclusively in the Kansai dialect when speaking Japanese, and why someone as young as her sounds like she's eighty years old. A curious combination of Kansai impatience and American laxity, her boisterous and carefree personality makes her an enigma to both sides of her family. Catherine tends to wear her heart on her sleeve, and her emotions are there for all to see.

Like her friend and rival, Kira Daidohji, she is a genius who obtained her doctorate in celestial mechanical engineering from the Celestial University of Massachusetts at the age of ten. Terry Yodogawa, the robot she created and built herself, rivals that of anything thought up by Kira. Catherine also shows a somewhat masochistic streak, as she loves nothing more than to be challenged and insulted by Kira.

Petra offered Catherine support for the research and development for Terry Yodogawa, prompting Catherine to join the Rosenberg branch of the European Celestial Union. Feeling a sense of obligation, she now takes on missions to eradicate the Drexler Institute and eliminate the planar rifts appearing around Japan.

Cathy can inflict pressure that is difficult to escape. She has a command grab and various projectiles.

The Sky is Mine!