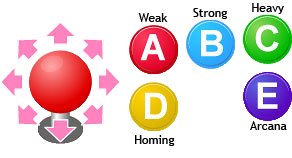 This game has 3 standard attack buttons, a unique homing button, and an additional attack button that is associated with your Arcana:

This game also uses the following button combinations ("macros"). In keyboard/controller setup, you can map extra keys/buttons to these macros. If you are playing on a keyboard or gamepad, this is highly recommended!

Supers (after inputting the correct motion)

Character-Specific Abilities (used by some characters only)

The button layout for simple mode is different. All of the content on this wiki assumes you are using Normal Mode and not Simple Mode. By using Simple Mode, you can perform specials and supers by pressing buttons without inputting the correct motions. However, you lose access to some normal attacks, some special attacks, Eclipses, and bursts. As a result, many combos become impossible in Simple Mode.

Simple Mode is normally allowed in tournaments because it is considered a large disadvantage to use it.

All of the content in this wiki (except for the info above) uses numpad notation as shorthand for writing motions. For example, instead of writing

On the ground, dashes can be canceled at any point, e.g. you can dash and jump to jump farther, or dash and block.

You can also dash in the air, but you cannot block or do attacks immediately like you can after a ground dash.

On the ground, backdashes have invincibility (abbreviated "invul" for invulnerability). You can cancel the recovery into specials.

(aka High-jump) A super-jump allows you to jump higher and farther than a normal jump. In addition, you can move left and right to change your jump arc after a super-jump.

The D button can do the following things:

To reiterate, because it's so important: 1D/4D/7D have around 5-8f of full invulnerability, allowing you to dodge most attacks and grabs and make them whiff.

After you've been hit, you can hold A, B, or C to tech (recover) in the air, against a wall, or on the ground at the earliest possible opportunity.

The Tutorial Comic also has a great section on teching with helpful visuals.

after you've been thrown.

Neutral throws have a larger window to throw-tech than side throws. All character specials are done with a motion + A, B, or C, e.g. 236A. Some characters have charge moves similar to Guile's Flashkick ([2]8x), Sonic Boom ([4]6x), and more (see: Saki).

If you fully-charge 5[E] or 2[E] by holding the E button, they will guard break the opponent. This deals no damage but gives you a chance to follow-up with a combo -- if they can't shake- and mash-out fast enough.

. If you don't have a B+C button, you can also use 214A+B+C to do an Eclipse. This ends EF and your Force Gauge recovers normally. There is no drawback to using your Eclipse.

. This has the same effect as bursting: your Force Gauge turns red and refills slowly. Because of this, Arcana Blazes are rarely used unless they can finish off the opponent in the last round of the game.