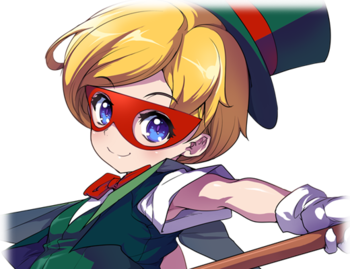 Honest, steadfast, and almost terrifyingly cheerful, Dorothy is the shining example of the prototypical honor student. However, she is a bit of a tomboy and will go out of her way to appear as an adorable young man. Her mother is a famous Las Vegas magician and her father is an acrobat, so her love of show business and stage performance is pretty much in her blood. She worked hard to learn magic, first performing with her mother and eventually becoming the headliner of her own show, where she is billed as “Dorothy the Wizard”.

Like her mother, Dorothy cooperates with the US branch of the Celestial Union. On the flip side, she is also a master thief like her father, and is currently being investigated by Interpol, though she is far too clever to ever be caught. She is currently in Japan to assist the Celestial Union in their effort to eliminate the Drexler Institute.

Dorothy is a setup character. Her normals all have very short range which makes her neutral game sub-par. However she is still a small character that is not easy to hit, and her wide variety of projectiles, while not made for zoning, still get the job done.

Once Dorothy lands a hit, her projectile based okizeme setups are second to none. She has excellent crossups, high-low game, throw tricks, and chip damage. Not only is she capable of all this, but there is depth to the way she sets things up - she has Poker Hands. All of her specials that set a card on the screen will count as a part of a hand, and when you complete different hands, you can get a variety of powerful attacks from them. If you're the type of person who likes to blow your opponents mind with crazy setups then Dorothy is for you, just remember that you also have to learn to deal with her weakness.