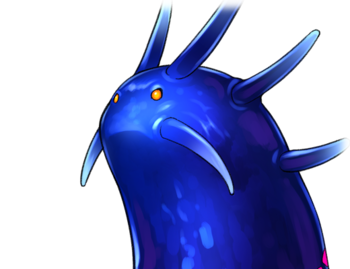 A mysterious being of a higher order that is a concentration of pure negative emotion. With an offering of just a drop of Lieselotte's blood, it appears from the shadows to implant negative emotions in her enemies.

All of Gier's moves and supers can be stalled by holding the button upon inputting the move, then releasing whenever you want by letting go of the button. While stalling the attack you can controller how Gier, who usually follows you on the ground, moves by pressing left and right on the control stick. This is very useful for setting up mixups but you need to be careful, as if you take any damage while stalling any Gier attack it will be canceled.