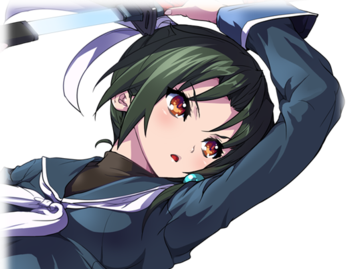 Doomed to forever bear the burden of being the Millennial Guardian, Kamui awakens whenever the spiritual and physical worlds come into conflict, returning to her slumber once things have been set right. Some of the more notable events she has been present for include: the oil crises of the 1970s, both World Wars, and others. Though adept at a number of martial arts, she fights primarily using a modified version of Iaijutsu using the legendary sword Tamayorihime Mikadomorimune.

Though she has been alive since before recorded history, she finds it difficult to adapt to the fast-paced changes of modern society. She shows empathy to those around her, and is especially devoted to Konoha, her dedicated servant during her current appearance in the mortal coil. She loves anything cute and fuzzy, and has an impressive stuffed animal collection. She suspects that the Drexler Institute is behind the planar rifts, and regrets that she did not finish them off when she last fought them decades ago.

Mid-ranged character who is relatively fast despite her range. Can play defensively, pressure from a distance, and/or rush down. She has good comeback potential, especially with certain Arcanas.

Time
Time has several set ups that allow you to use Kunugi safely and run strong mixups afterward. Unfortunately, you cannot burst when you feel like with Time and Kamui's stamina is already low enough.

Dark
Dark can give you relatively strong mixups. After a JE ender, you can use Sichel or Martern for some pretty mean left right mixups. If you succeed, you knocking them back down into the same thing again. If they block it, you maintain your momentum.

Wind
Wind is another good arcana for Kamui. It gives you some projectiles to work with and the pushblock to take the risk out of escaping pressure. Wind's triple jump also helps increase the damage off many different confirms.