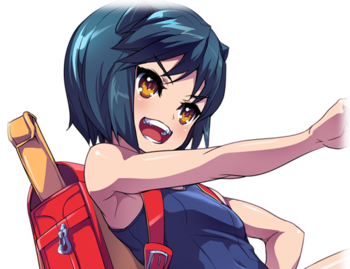 The brilliant, hyper-genius who obtained her post-doctorate in celestial physics from the Celestial University of Massachusetts at the age of 10, Kira is extremely arrogant and possesses zero social skills. While grudgingly open and sincere with those she respects, anyone outside of her circle of friends will be treated to almost comical levels of scorn and abuse. Unfortunately for everyone, her circle of friends is more of a line, as she currently only respects two people: Professor Mei-Ling Hua, and Catherine Kyoubashi, who attended university with her.

Using the power of the independent ether conductor she invented, she has attempted to take over the world more times than can be conveniently counted, but has always come up short, much to her chagrin. She is resentful over the fact that her friends and rivals, Catherine and Mei-Fang were invited to Rosenberg, the organization created to stop celestial disasters in Japan. While removing the planar rifts in Japan, she also not-so-patiently plans her revenge against those who would thwart her (i.e.: everyone).

Grappler that can fly.

Few Arcana perfectly compliment Kira. Most of the time, you will go with choices that supplement her high stamina and increase her damage potential. Think of it as upgrading a tank.

Metal
One of, if not the most popular arcana for Kira. Not only does it supplement your stamina, but metal can boost your damage of small confirms enormously. Metal Kira has an easy confirm into Dikaiosi that eats chunks of health at a time. You can continue to make Kira strong and stronger for that round with Epidosis. Metal shield also helps Kira with some mixups post knock down. They can't hit you, but you can grab them.

Earth
Earth gives you a lot more stamina but takes some power out of your punches. Luckily, Earth Punches can fix that with the right confirms. Earth's 6D can also give you some interesting gimmicks for your SPD.

Evil
Evil (Commonly referred to as poison) offers powerful projectile okizeme, and a swap positions super to combo while your force gauge is recovering. Teleports can also be used to mess up the positioning of zoning characters such as Scharlachrot, and make approaching them that much easier.

Thunder
Thunder takes Kira's existing clash game and adds to it with a fantastic reversal/anti-air in the form of 623E and clash frames on forward dash. During okizeme, Fearg Lorg can lock down your opponent as they try to guess their way around a throw mixup. It's especially dangerous since Kira's 623 series can punish people trying to chicken block it on wakeup.

Kira has a high amount of flexibility in her combos, and depending on the situation you can choose which variation will work best for you, there is rarely a "best" combo for a given situation and it will come down to choosing whether you want high damage, superior okizeme/resets, self-buffing (Metal), or meter gain. These routes will work with most arcanas and work great as a base to experiment with.

Alternative Ender: Replace 2C with 5AA 623B (Some arcanas can make use of the 623B wall bounce to set up okizeme or power up.)