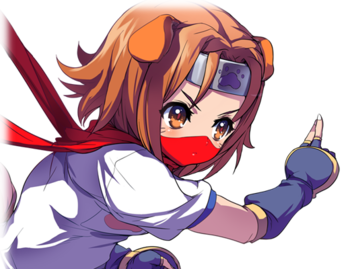 The Koinumaru ninja clan have generally been classified as demons throughout history due to their appearance, which contains the attributes of both humans and canines. Modern descendants of the clan look mostly human, although they have dog-like ears and tails. Konoha normally hides these when out in public, but they tend to come out whenever she's engaged in battle. The Koinumaru clan is incredibly tight knit, and is now more of an extremely extended family, though a family in possession of incredible fighting skills.

Konoha grew up learning the family fighting style in the forests and mountains surrounding her village in preparation of becoming the retainer of the Millennial Guardian, Kamui Tokinomiya. Having always looked up to Kamui, she embraced her new role with an enthusiasm that is hard to not get caught up in.

Like her master, Konoha performs a number of different tasks for the Celestial Union when she is not looking after Kamui's comfort and wellbeing.

Small, fast rush-down character with ninja moves. Difficult for many opponents to pin her down. She has some of the smallest normals in the game. If you wish to do her optimal 0-bar, no-EF combos, you must learn to kara-cancel her 6C into j214x.