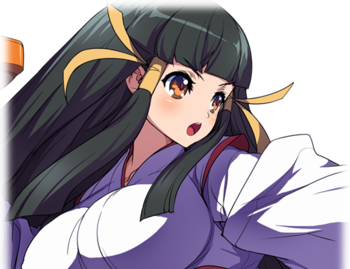 The scion of a family who has dealt with the spiritual plane for untold generations, Maori is the most powerful of the four sisters who currently comprise the Kasuga family. Known for its ability to fight and subdue demons, the Kasuga family frequently assists the Celestial Union with demon-related matters. Although the four Kasuga sisters spend most of their time tending the family shrine, they are occasionally called upon by the Union to travel throughout the Kantou region to deal with supernatural emergencies.

Maori is the de facto matriarch of the family and is seen by those around her as very motherly. She is often busy entertaining her younger twin sisters, who always seem to want to play. And though she has very little free time, she values her time spent at school, especially her after-school club activities.

A kind and compassionate person, she is always friendly to those around her and is seen as absolutely steadfast and reliable by her friends. She is currently allied with the Celestial Union and is helping them deal with the planar rifts that periodically pop up around the country. Like the Union, she is suspicious of Petra, who seems to be intent on continuing the research done by the Drexler Institute.

The following combo can be used to get the gold star in trial 3. It is not necessarily useful in an actuall battle