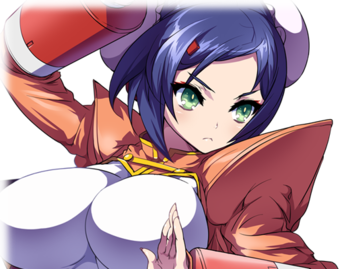 A super-powerful all-purpose humanoid developed by Professor Mei-Ling Hua, the genius scientist who received her doctorate in celestial sciences from the Massachusetts University of Celestial Engineering. Powered by the revolutionary celestial drive, which converts the ether found in the atmosphere into energy, Mei-Fang is the ultimate artificial life form. Programmed to be honest and forthright, she is often chided by her creator for not smiling enough.

Although her creation was funded by the military, Mei-Ling refuses to allow Mei-Fang, or any of her related technology, to be used for any kind of military activity. Instead of military tactics, Mei-Fang has been endowed with four thousand years of Chinese recipes as well as knowledge of every known Chinese martial art. Mei-Fang makes it a point to look after her creator, as Mei-Ling frequently forgets to take care of herself due to being either incredibly lazy, or by being engrossed in SCIENCE!

The professor was invited to be the celestial engineering advisor of the Rosenberg branch of the European Celestial Union established by Petra, bringing Mei-Fang with her. She currently is on a mission to eliminate the Drexler Institute and any planar rifts appearing in Japan.

Rush-down character with links instead of chains.