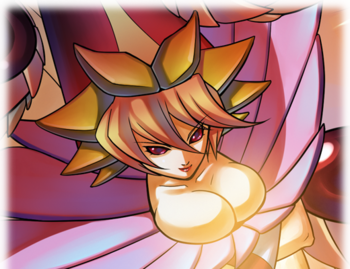 Mildred, who became a being of a higher order in the last installment of “Arcana Heart”, was swallowed into the spiritual plane during the convergence of the planar rifts. Becoming a true Arcana after gaining new powers in the spiritual plane, she reunites with her sister Angelia after seven years. She accompanies Angelia as her guardian spirit, though hesitant at times because of Angelia's overbearing personality.