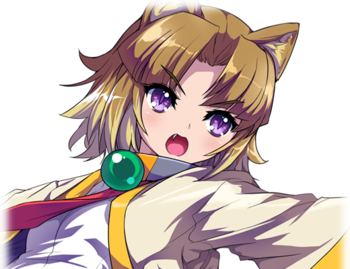 A member of the Inuwaka ninja clan and an adept of the spirit arts, Nazuna was thought to become the next retainer for the Millennial Guardian. Because of her sister Akane's whimsical nature, Nazuna tends to try to compensate by being overly serious and diligent to the point of annoyance. Although physically weak, she continues to study and train in order to become stronger. Although she uses the Inuwaka fighting style as a base, she employs the spirit arts when in combat, and relies on the sacred beasts Hayata and Fusumi.

Nazuna detests rule breakers and is incredibly opinionated, never hesitating to offer her thoughts whether others want to hear them or not. Also, she is overconfident, self-righteous, and short-tempered, but despite all of her flaws people tend to like her anyway.

She currently lives above a cafe located in Akabane called the Ina-hoan, which is run by humans connected to her clan. She works there part-time as a waitress, but her personality makes her take on more responsibility than she can handle and is a frequent source of customer complaints and broken dishes.

She works hard to be recognized as Kamui's retainer and sees Konoha as a rival. She is ordered by the Japanese branch of the Celestial Union to close the planar rifts appearing across Japan. She always yearns to do good deeds in order to earn the praise of Kamui.

Nazuna is a zoning character. However, that is not the only reason to play her. Of the projectile heavy characters in the game, Nazuna has the longest ranged normals, which accents her zoning game greatly. She also has a pretty good overhead and crossup based mixup game once she gets in so she is an expert at controlling the flow of the match.

On the downside, Nazuna has a very large hitbox and no fully invulnerable attacks, making her an easy target for rushdown. While she does have some nice defensive tools such as good anti airs and clashing moves, she lacks the strong reversals that pretty much every other large character has.

Nazuna's average damage is also well below average. Nazuna CAN spend meter for damage, but more often than not it is a better idea to spend your meter on strong projectile based okizeme setups to fully utilize her strong mixup game.

sometimes useful as a block string since plant arcana eclipse is a unblockable, while 5C keeps them in blockstun. it is easy to react with 4/6D when they see the flash, against anyone with matchup knowledge.