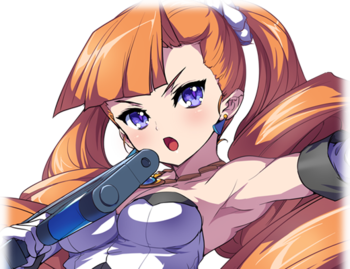 The Lagerkvist family is renowned throughout the entire Celestial Union, as the family seems to be a never-ending source of competent and capable officers for the organization. Petra, in addition to being brilliant and driven, also possesses exceptional spiritual powers that eclipse even the most powerful angels found in the Lagerkvist family line. As is customary for Lagerkvists, Petra became a member of the Swedish branch of the Celestial Union, and was selected to work at the Western European branch shortly afterward.

Her abilities rivaled, and in some instances transcended, those of the legendary English angel, Angelia Avallone, a fact that caused a great many members of the Union to become outright hostile to her. Despite the widespread animosity directed at her, Petra continued to add to her reputation by completing every mission assigned to her, going so far as to accept being essentially banished to Japan. Now in Japan, she is dedicated to stopping the Drexler Institute, an organization that aims to destroy the island nation by unleashing the Divine Celestial Weapon.