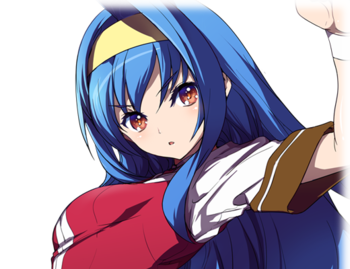 Saki is an exceptional student who impresses all of the adults around her. Considerably more mature than most of the other students in her grade, her time spent studying abroad in England when she was a child adds a further air of sophistication that her classmates cannot ever hope to match. Although she comes across as cold and somewhat overbearing, Saki is actually kind and more than a little shy.

Heart's best friend since childhood, she is the only person Saki feels comfortable enough with to show her true personality to. She has a strong sense of duty, and will frequently take on more responsibilities than she is able to bear. She also, until recently, had major problems socializing with others after suffering through the trauma of losing Fiona, though she has gotten much better about opening up to others.

Because of her powers, she has volunteered to help the Japanese branch of the Celestial Union to eradicate the planar rifts that occasionally appear in the country. And while she doesn't really believe the rumors that the celestial stones that emerge from the rift will grant their finders a wish, she still makes it a point to find one in the hopes of bringing back Fiona.

Rushdown character with charge moves and high damage potential. Has two overhead divekicks and a command roll that can cross-up.

Below is the list of combos from the Saki combo tutorial for new players video above. Lists basic, intermediate, and advanced combos. These combos are generally optimized for consistency rather than max damage.

(Ender is character-specific and depends on midscreen vs corner: see Saki combo doc below for more info.)

Also talks about other useful topics. Explains why you should use certain combos over others and the importance of using EFC rather than supers/homing. Explains hitstun reduction and how to know if you need to spend resources to combo from a hit. The combo notation is provided in the video description and copied-and-pasted below.

Demonstrates additional combos and combos optimized for damage. They may need to be shortened in the corner or vs certain characters, e.g. Fiona. The combo notation is provided in the video.

Intermediate and advanced BnBs. All of these combos should work in both Love Max and Six Stars. Six Stars adds an additional combo route using [2]8A EFC.