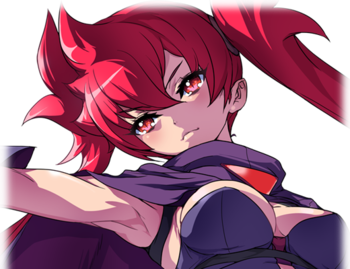 Another Valkyrie who was brought into existence by the Japanese branch of the Drexler Institute, she's the product of their experiments in creating artificial angels. Like Weiss, she was trained almost since birth to be the perfect soldier by the Institute, who hid their activities by pretending to be a religious order.

Scharlachrot has a very strong emotional attachment to Weiss, and would gladly kill or die for her in equal measure. After the downfall of the Drexler Institute, she was taken under Petra's wing, but has since disappeared. Scharlachrot blocks the angels' way as the ultimate opponent. What has happened to her? What is her true objective?

Long-ranged zoner with below-average HP (due to reverse guts). Arguably the best pressure character, she can pressure from a distance where the opponent's counter-play options are limited. She also has tricks, often using her fulcrums (236A/B/C), to open-up opponents who only block.

The games vs Momiji's Weiss are located earlier and later in the video.