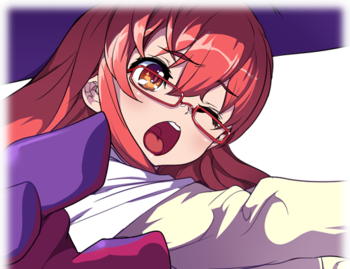 A dedicated bookworm and cat lover, Yoriko is incredibly timid and shy. She is also obsessed with the occult, and has taken over the school's former library room for her occult research club (which has no members other than herself…). Pressured by Lilica into summoning a demon, Yoriko only partly succeeded, conjuring up the self-proclaimed demon lord Michelangelo, although she stripped him of his more significant powers in the process. And thanks to Yoriko's failure, they were bound by a contract that forbids them to ever be apart from one another.

Since then, Yoriko has tried to return to a semblance of a normal life, although Mikey's selfish desire to explore the human world frequently throws a monkey wrench into her plans. For example, she always blows through her allowance money buying French crullers for her unwanted demon familiar.

They hear rumors that with the planar rifts opening in the world, celestial stones are appearing that can grant their finders a wish. But ignoring the rumor about the wishes, Yoriko sets off to find them for their value as strange magical items, with Mikey willfully helping her fight.

Starts as a mid-range zoner with stretchy, Dhalsim-style attacks. Wants to input a triangle or pentagram (after 632146A/A+B) to power-up her specials and then rush the opponent down, e.g. all 236x specials become invul and multi-hit.

Rising Anguish of the Underworld

The Power of the World Conquering Demon King

The Forbidden Sorcery that Controls Life and Death