Should I play this game?

Play this game if you want...

Do NOT play this game if you don't like...

Is there a community Discord?

What is the rest of the Art of Fighting series like?

Art of Fighting 1 is nothing to write home about. It’s another page in SNK’s history, but it can be boiled down to little more than both players taunting each other twice and turning the game into a glorified poke fest with no combos. It looked good for its time but it offers little for gameplay. Art of Fighting 2, once you get past the awkward control scheme, makes for a unique fighting game different from what Art of Fighting 3 offers, thanks to being a significant improvement over Art of Fighting 1.

Is this game actually as hard to learn as Tekken is?

While we describe the game as "2D Tekken" at its most basic level, or even "2D Virtua Fighter" in a few other ways, it is nowhere near as brutal to learn. There are only 9 charaters, no 3D movement, move lists are significantly smaller, and despite its differences, you'll still generally learn Art of Fighting 3 as you would any other 2D fighting game. Its more unique approach to the 2D fighter subgenre will certainly take some time to get used to, but it's far from brutal on its fundamentals. The hardest part is learning to combo in this game, since it has tons of tight links outside of rush combos, and it's easy for players to assume juggles are little more than one rush combo or one special. Character specific combos also exist, and while you won't need them per se, as players grow increasingly more adjusted to the game's system, combos will easily start deleting over half your life bar. Other things that are important, like delaying strings, meter management, and okizeme are not any harder to learn, but will take some getting used to with how fast this game is.

Wait, this game is FT3 in tournament sets?

While we are still debating over whether to make the game FT3 of 3 rounds or FT2 of 5 rounds in a tournament setting, we can agree on one thing: this game is too fast for FT2 sets. Much like real 3D fighters, this game is explosive and the match can quickly do a 180 out of nowhere. On top of that, Ultimate KOs end the match instantly, giving the point to whoever performed it. While we are likely to go down the FT3 of 3 rounds route, we still haven't really decided if UKOs are common enough to justify it, or whether the longer 5 round sets would keep things more balanced. The other issue would be having people remember to set their dipswitches to 5 rounds during a tournament.

Who is easy to play? Who is hard to play?

Currently, as of August 2020, this is the most recent tier list that we have decided upon. 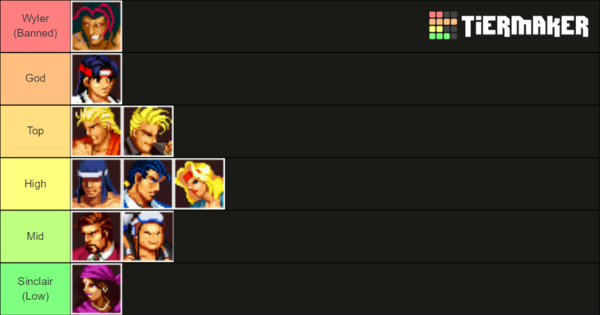 While the tier list goes from God to Low tier, it should be noted that everyone is viable in this game, and Sinclair is arguably the only real character who is not very good in this game. The game is also still new, so we have yet to see its meta flourish, but for now we have a pretty good idea that this accurately reflects what we know.

What about the matchups?

Is there a training mode?

Unfortunately, SNK has never made one for Art of Fighting 3. The AES version and even the Art of Fighting Anthology both have no sort of training mode to work with. But there is a way to make a bootleg training mode, one that also works across multiple Neo Geo games. It is barebones, but at least you won't need to spam savestates. Training Mode can be found here. (Will soon add)

Art of Fighting 3 still uses the same terminology that other 2D fighting games use, but here's a small list of terms to help elaborate what some of the wiki mentions.

Who has the best jabs in the game?

Jabs in this game, or a 5A, serve quite a lot of purposes. They can poke, shake the enemy off you, counter hit launch, help flinch back at the opponent, and can even be used in some combos for extra damage if you can pull off the tight spacing and timing. They're overall more important in this game than they are in other 2D fighting games (just like gasp Tekken and Virtua Fighter.) Jabs in Art of Fighting 3 vary widely in quality, so here's a quick recap of what the best jabs in the game are:

Who has the fastest Pursuit in the game?

Pursuit speed hardly affects anything in a real match, because in most cases the opponent is right next to you if you can perform it quickly. But in those uncommon cases where you need to commit to the Pursuit a little more, here's a small chart that ranks the speed of each character's Pursuit: