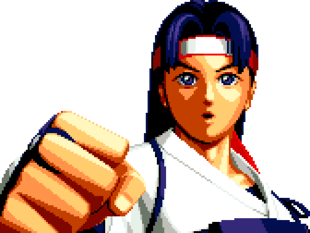 The daughter of Todoh himself, Kasumi makes her debut in Art of Fighting 3. As Todoh’s daughter, she absolutely does not disappoint in this game: hard hitting damage, fast attacks, crazy corner carry, and is a nightmare to deal with up close. What’s worse, she’s smaller than everyone else! (Except Wang) Executing her beyond the basic chain combos and raw damage takes some work, but once you invest in the character, you’re playing with the strongest force in Art of Fighting 3 that isn’t Wyler.

To be fair, let's list her negatives first. She has no long range zoning options whatsoever. She is also arguably the hardest character to play in the game hands down, given her higher execution barrier. And... That's it. Kasumi can juggle for days, her 236A absorbs all priority, practically everything she has can either start a combo or cause a knockdown, in addition to carrying the opponent to the corner. While she's far less scary in most of the KOF games, Kasumi is a monster of a character in Art of Fighting 3.