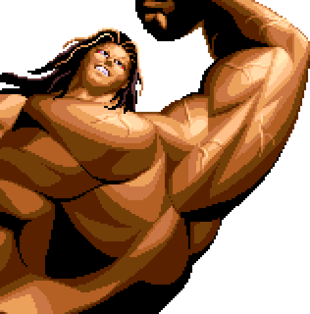 Difficulty: Braindead Playstyle: Turtle The final boss of Art of Fighting 3, Wyler is a big buff dude obsessed with flexing, hellbent on recovering old lab data to create a deadly elixer. And boy, is he a buff dude. As typical of SNK boss character, Wyler is quite broken and is, of course, banned from competitive play, He isn't banned for just being a boss character, however, as Wyler has a very particular tool up his sleeve which makes him extremely broken by itself: his 5A. His jab is so powerful, that we're certain it gives him an auto 8-2, 9-1, or even 10-0 matchup against everyone else. Huge damage, it combos into itself, launches, juggles, and has insane reach with zero startup or recovery. Aside from that, his specials are all incredibly busted in their own right combined with easy combos, as if you'd ever need them. He's got a decently cool design, but these are the reasons why Wyler is banned in tournaments.