There a lot of questions & confusions about what games are played, so let's start by one question which is more about Asuka 120% in general:

Which Asuka 120% games are played?

Overall Special ver.2 (SP2) & LimitOver (LO) are the most played.
In the west, the main game is LimitOver while in Japan they focus on SP2.
But there is no bad or good answers, you can try any Asuka games and you can be sure to have a good time (except maybe Final :kappa:).

Though this is a LimitOver wiki, so let's dive into the interesting content! First, let's start with the basic:

LimitOver is a patch of Limited made by the Fill in Cafe staff after it went bankrupt. They changed the balance of the game and added a lot of moves, normals, specials and supers,for everyone. They also stripped the game to the basic competitive minimum: so they removed story mode, pretty much all menus are bare minimum / debug-like.

How does it play? / Is this game for me?

LimitOver offers ton of freedom on how to move around or approach situation either offensively or defensively thanks to its unique Clash / Guard Cancel dynamic.
So if the idea of parrying projectiles by punching them, flying around with full air control or reverse situations thanks to your guard cancel options; this game is made for you.

Is there a discord for the game?

On which console/emulator are you playing?

Mednafen, it's the only emulator that can emulate stable 2D Saturn games & it has a good Netplay. Check the section belwo to see why we're not using retroarch.
Also most Asuka Games are playable on Mednafen! Here's a quick recap:

Why not using RetroArch?

Even if it did, there's also some other reasons:

They are the default rules.

I. Easy character(s) to begin with?

Anyone, there is no bad pick. The game has easy inputs & everyone has at least one basic ground to air chain combo.
The game mechanics also allows for a lot of freedom on how you want to approach situations & express your style.

Thanks to the strong universal mechanics & freedom of movements, Tier are pretty compact.
There is definitely tough matchups, but nothing impossible.
(also it's still early, we don't know everything about characters / systems, so the meta will change)

If you're familiar with Melty Blood or uMvC3, Asuka also has universal combo route. They're not optimal, but it helps to get started with the game.

A bit more advanced (might need some tweaks in timing or moves to work):

If you want to know more about the combo system, go check the chain routes or the juggle system explanations in the "Systems" page. 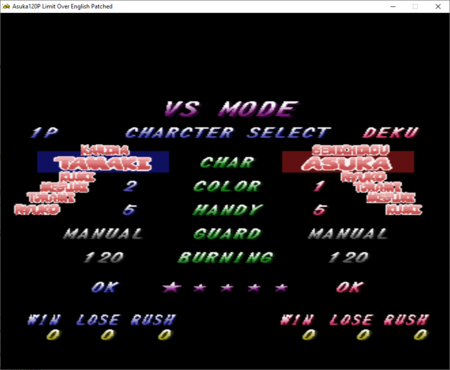 Recommended setting for the in game Training mode (DEKU).

To get the training mode go on the character select screen, tap Z and you'll see the word "DEKU" appear instead of "2P".
If you change your setting like in the above picture. You'll get:
And sadly, that's all...

While you are in training mode:

A LUA script, still an early WIP. You get useful informations like, form top to bottom:

You'll have to play on BizHawk to use the LUA work. Once your input are mapped, just open rom and drag the lua script into BizHawk window.

⚠️ LOOKING FOR HELP ⚠️
I want to add more features, but I'm not a dev & I won't be able to do everything alone. If you want to help in any way:

It's possible to setup a sort of 2 players training mode, to test stuff local or online together. The only downside is you don't see how much damage you're doing. 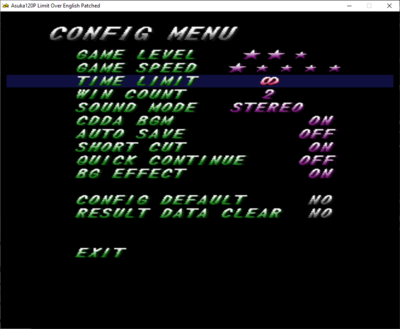 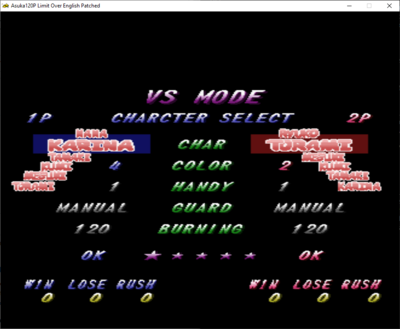 Mednafen doesn't find the rom folder / cannot launch a game.
Be sure your path is correct AND doesn't contain any accents or symbols (eg: é, à, #, etc).

I have problem to setup my inputs / don't know how.
First check how to setup your inputs in the Controls page.
If after that your stick / pad is still not recognized try using Joy2Key or Xpadder to trick the emulator

Does it has netplay?
Yes, in short, there is two ways:

I get choppy frames / small lag jumps during netplay, but my opponent doesn't.
Outside of being further from the server than your opponent or having a worse connection overall there might be one solution:
try to set the process priority of the emulator to "realtime".

Sadly there is no way to save this setting, you can't even add command lines to a shortcut as you use a software(mednaffe.exe) to launch it.
If anyone figure out a way, let me know.

A server "actively refuse my connection".
Check your port in the Netplay tab: it might not be set to the correct one (4046 for most servers).

How can I contribute to the wiki?

In order to get an account on Mizuumi, please refer to the instructions on the getting started page. Once you have an account, please take a look at the character template page and see if all current pages are adhering to it. Adding combos, proof-checking frame data entries, expanding the Overview sections, all constructive contributions are much appreciated.