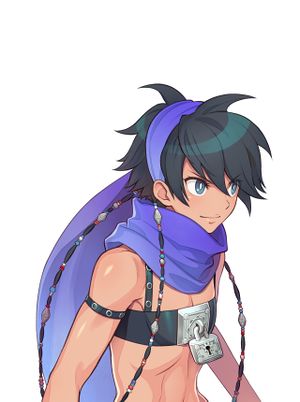 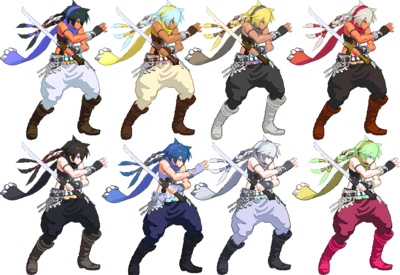 You are a computer simulation. Your existence is meaningless. Might as well use your incredibly degenerate bomb oki to wreak havoc.

Commanding, low-risk oki off every touch. Strong air-to-airs. Lacks in overall damage compared to some characters, but the layered mixup game involving bombs more than makes up for it.

Down Attack: 4S > walk forward > 3E > 4S Explodes > 5L Pickup (the explosion should catch them trying to punish your 3E)

Can add a 2nd mixup if you use 5S+E instead

6E versus 3H is still quite the potent mixup even if you don't have a Bomb over your opponent.

Throws in this game can't be broken on reaction. Walking in and out of throw range can oftentimes provoke a reactionary throw break attempt, which can be punished with 3H and other normals.

Due to a lack of reversal options, you're getting out the ol' fashioned way. You can save meter for Guard Cancel, or you can look for outs to counterpoke or instant-air j.H+S.

Throws in this game lose outright to normals, so if you really expect a tick-throw you can 4E for CH damage.

Depending on the matchup, you'll be throwing out Bombs and moving forward after them, jockeying for space. j.H+S is actually a very good poke here, as it masks when you actually intend to jump-in as you can do it at any point in the jump arc, and it cleanly beats out certain normals and anti-airs at range. If you can get your opponent to block a bomb, you can run throw mixups, go for an ambiguous crossup, or continue pressure.

3H is probably your longest button with the highest reward on hit, while still being a low. Learn to confirm off it right into EX Hayate > Flash to turn stray counterpokes into oki.

EX Bombs are very useful in matchups where you have trouble approaching. It's expensive, but your opponent is normally forced to answer them or risk being put in a bad situation.