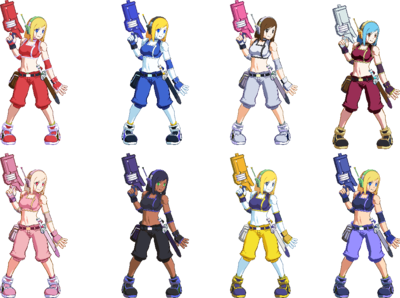 Curly is the main heroine of Cave Story.

Someone raided Curly's panty drawer, to which she responded by shooting everything in sight.

I just remember her dying when I last played the game :(

Curly Brace is a character that excels in zoning and controlling space. The best at keeping the opponent out and preventing them from getting past her defense. She can seem to be extremely frustrating and downright unfair to fight because of the number of tools she has to keep the opponent from getting in on her on the ground and in the air. Gameplan revolves around chipping away at the opponent's health with projectiles and frustrating them into committing to risky options such as jump to get in.