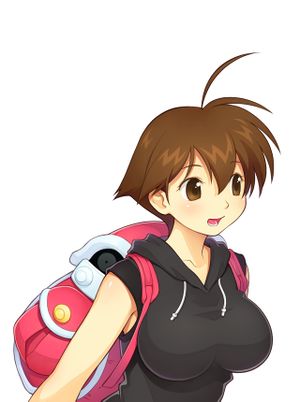 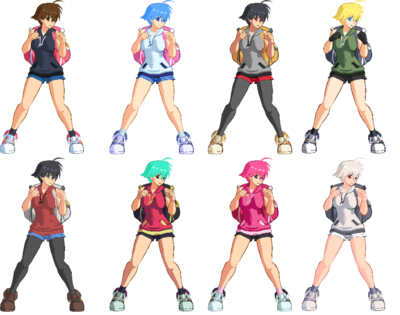 A sushi chef with a fishing rod of destruction. When that lure comes out, run for you goddamn life.

Kawase an agile character who uses her great mobility to move around the stage and harass opponents with her long-reaching skill. Kawase's ability to use EX Rubber ring to cancel out of Rocket Dash or Aerial luring hook is integral to her game plan. Not only EX rubber ring but Kawase is pretty reliant on EX for pressure, confirming into combos and reversals. In a slower pace match-up where Kawase, not the aggressor (vs Master T or rushdown characters), she should try meter building with retreating rubber ring and attempt to counter her opponent's approaches. When she is the aggressor (IE vs Curly or Zoners), she should go on the offense and try stay relatively close and only retreat when she has gained a substantial life lead or find herself in a disadvantaged position

Kawase's offense is pretty linear and doesn't leave much room for the mix-up, and over-extending her pressure put her more at risk. At best Kawase can frame trap with Hooking Lure (5S) against an opponent who lacks a 4 Frame reversal (Master T, Quote for example). The frame trap does have a gap that loses to Frame 1 invincibility option like the back dash or EX/US reversal. The reward for 5S is small but the risk is also low. On regular Hit Kawase is plus enough to go for another offense attempt, though Kawase can also use 1 bar for either OS or 5US to convert off 5S. IF Kawase properly Frame traps 5S than a Counter hit should occur and Kawase can get full combo by linking 5L/2L/6L. Using EX 5S becomes yields higher reward and combo stability as it naturally launches on regular hit, but on Counter, hit is 1200 starter that leads to 4k combo with hefty corner carry with proper routing. Should Kawase properly condition her opponent, she can attempt to go for more risky but higher rewards( rocket dash, 8/9S resets) since her opponent are less likely to mash out of the offense in fear of being frame trap by luring hook.

Rocket dash is an overhead with a longer start-up than 6E but can be canceled to ES rubber on the block to make it safe or Offensive skill on hit confirm on top of on hit leading into knockdown which allows limited oki for Kawase. EX rocketed dash (4E+S) is safe on block but the start-up can be interrupted, using a charge 6E will make EX rocket dash a true block string. While 4L+S is more of a command movent to be used against zoning, it can be used as cheeky feint into low or throw but very high risk and should be seldomly used.

Kawase 2H is worth mentioning as a poking tool, its low attack with a decent range and very little pushback so it can be used to pester or check opponent ground approaches. Spacing 2H near its max range is good idea most times as theirs things can contest with it, but watch out for 6E which can low profile it.

6L vacuum effect can position Kawase for a tick throws but is highly risky if not condition the opponent first.

Kawase is the queen anti of Anti-air with her 5E being one of, if not the best anti-air normal. Kawase also has 5 more anti-air in the vein of 3B,6{H},2S, 8ES,2US. While having multiple anti-air may seem redundant when BLASTR offers 5E as a universal anti-air tool, some characters have tools specifically to combat 5E thus Kawase should use the other when needed.

Kawase 4S series has projectile invincibility on startup, allowing Kawase to maneuver around some zoning.

Kawase only full invincibility moves will be 2ES and her 5US, should use these options as a reversal. 2E+S has a lengthy startup making it easy to bait out. 5US is faster but very expensive.