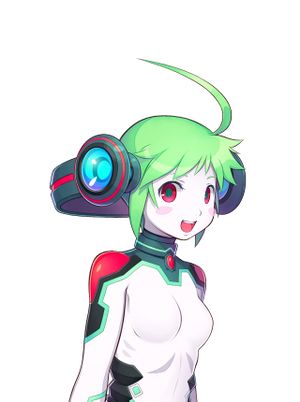 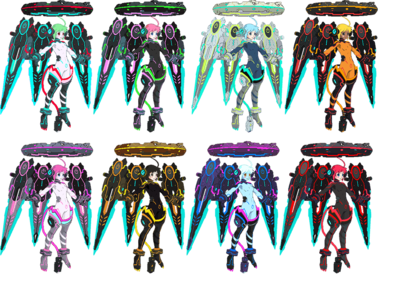 Lina is the co-owner of an interdimensional Discord server. Her cool robot attachments are included in her Nitro subscription.

something something laguna blade

6HS is a typical combo ender and allows Lina to set up 5HS for oki. You can then option select the opponent's wakeup by inputting 3E. If the opponent delays, the 3C will come out and continue to combo into the Giga Mine. If the opponent wakes up normally, the Giga Mine will make the 2E that comes out safe. Still vulnerable to get up attacks. Example

If you land a 2S or 2SH in neutral and have 2 bars of meter, you can convert into 2HSE for 5K damage.

Your basic hit confirm. They may be lights, but you shouldn't have to worry about proration locking you out of your bnbs with these. 6LL is mentioned primarily as a confirm off of 5HS that saves your 5L for later.

On the surface, this starter should have the same proration as 2LLL, but 5L is an important normal for picking up juggles in certain Lina combos, so it's best not to waste it on your starter and trigger Same Move Proration earlier than you need to. The range on 5L is slightly longer than 2L and startup is 1F faster, so there may be times you need this starter, but be prepared to alter your route.

The crux of Lina's setplay. In this case, this starter can refer to the orb alone (as in teleport left/right mixups) or when used to convert off of a hit (6E/2E/throw). Locks Lina out of her sick mid-combo 5HS routes, but you'll live.

A button with 4 hits and a surprisingly large hitbox. Worth keeping in mind as something to convert off of.

The universal fatal counter. If this counter hits, go ahead and jump to the "TOD" section.

Comfy filler that fits in anywhere and can be juggled after using 5L. Typically best near the start of a combo.

Pulls the opponent in and launches them high off screen. Incredibly easy to combo after, typically using 6[H] (which wallbounces in the corner) or j2H. If you've got meter, use it here.

Launches onto 2S at midscreen or can be followed up with j2H or 5HS > 4E in the corner following a wallbounce. Usually requires something like a 6ES launch or 5HS stun to connect.

Arguably Lina's best use of Offensive Skill. Great way to convert off of raw H hits that aren't 4H, particularly 5H. Triggers Same Move Penalty off of 5HS starters, though.

An expensive but universal sideswitch. Useful for flipping the tables when your back is to the corner.

6HS is your best oki ender, giving you enough time to 5HS on knockdown and either meaty or block a Rising Attack. Some heavily prorated combos might end at the 6H, in which case you can cancel into 5HS oki (which gives you even more advantage, so you may choose to do that anyway). And while 6H tends to leave the opponent closest for oki, you can use a different H normal for either more damage or in case you used 6H earlier.

Ultra ender. 6S > 2HES does slightly more damage, but the timing and height requirements are very strict and it only works in the corner. The other two work anywhere and do about the same amount of damage.

Ultra ender from 2S. Should be more damaging than 6S > Ultra ender, but obviously somewhat more difficult to work into a combo. Note that while this is listed as an "ender," this works as a conversion for raw 2S/2HS hits in neutral as well.

Basic combo into Ultra. Leaves the opponent at full screen for matchups you'd like to keep your distance from.

Basic corner combo into Ultra. Ender has tight timing requirements, so you can switch it for something easier.