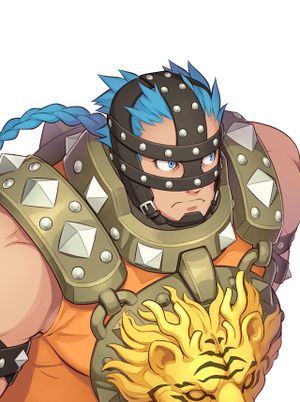 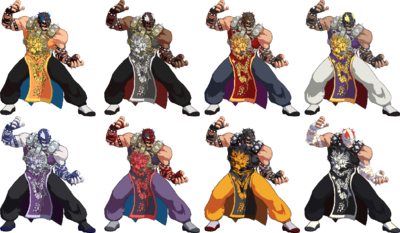 The T stands for THUGGERY. That's what you have to be a master of in order to fight in Blade Strangers.

Master T is a rushdown-oriented character with a straightforward gameplan: staying in your face. Offense is this character's strong suit, with strong frame trapping and damage output that rivals the likes of Shovel Knight. He possesses some of the best pokes in the game but unfortunately lacks mix-ups so opening up opponents may be difficult at times. T's main weaknesses are his mediocre defense and Neutral game, so you'll need to really be careful when trying to approach your foes or when you're defending.

Not much to say here except be patient. Playing neutral is one of T's biggest weaknesses so it's in your best interest to learn how to play it. Use your huge normals to control space but be mindful of how you use them, as they leave you wide open if used at the wrong time. jS is a good tool to use in neutral; It's fast, builds meter quickly, and is safe if blocked. T doesn't have any real option to deal with projectiles besides HSE, so your only way to play neutral vs Zoners is to just wall your way in and stay in.

Yet another area T doesn't do well in. T doesn't have any attacks that are completely invulnerable so dealing with pressure can be really tough at times. Use 5L to check attacks that may seem unsafe since it has 5f of start up. 6SE is ok as a reversal as well as 6HS, as they are invulnerable to mid-highs on frame 5 and can convert off them. 2HSE is your best reversal due to it being invulnerable on start up, really fast and hitting low. Otherwise your best bet is to use Defensive Skill to get opponents off you.