Kagari is a secret agent for Kurenai, a clan of ninjas that hate the earth-union military and raised Kagari. Her parents and brother were killed in war, now she fights to honor their memory and to repay Kurenai, her adoptive family.

Kagari is an all-round character with a good fireball and DP, she's the closest thing to a traditional shoto in Chaos Code. She has strong space control and movement which she can use to control the pace of a match. Her mix-up is dangerous too thanks to being able to combo off throw anywhere on screen. Her damage leaves a bit to be desired, but she makes up for it with strong reset options thanks to her teleports. She's relativly simple to learn, but thanks to having such a wide array of tools she has a really high ceiling.

Kagari's backdash is 20f total regardless of bounce choice

Run: Kagari has a very fast run speed, making it a good choice for tech chasing and aggressive styles of play.

Step: Supplies faster meter gain and evades lows/throws. Kagari is committed to the step for 16 frames.

Shuriken - Rakurai: Air fireball, the angles are very good for controlling space. Probably Kagari's best neutral tool, but also has uses in combos either for special to super cancels or turn an air throw knockdown into an air tech for tech chase/air reset options.

Kawarimi - Oboro: Teleport counter, it typically doesn't actually punish things because of it's recovery, but it gets Kagari close and activates on projectiles. It's utility is a little more matchup specific than kagari's other extra moves, but it's never useless.

Ouji - Harinezumi: Poison Super, Does pretty good damage if you get all the poison ticks. Kagari has some pretty high damage exceeds using this move to stack on poison. A good choice for the resource dumps, but also good if you plan on running away and zoning out.

Ougi - Ryuusei Kyaku: Divekick super, works as an ender for air combos and for exceed routes. Not as high damage as Harinezumi but because it can be used from air combos the chances to use this super are higher, and since it's damage is all upfront rather than poison it can be a better choice if you want to go in more than run away.

Kagari is pretty mix and match, all of her options are strong so it comes down more to what you value and what the matchup calls for.

This pairing is pretty common. It's one of the most straight-forward Kagari sets since Shuriken helps her control space and it's very easy to find times when Harinezumi will combo. This set also has some nice synergy since Shuriken is an air special that Kagari can cancel into Harinezumi, her only air super. It will work with basically any kagari playstyle.

This pairing gives kagari the most neutral tools, but limits her damage output. That limit on her damage output isn't necessarily a huge deal however, as Kagari can get by using her default supers.

Shuriken - Rakurai/Kawarimi Oboro & Ouji - Harinezumi Harinezumi's draw is mostly the damage, to that end it doesn't really matter which other extra move you take.

for all combos ending in airthrow > 236A you can buffer a 5A afterwards to catch no tech. If the opponent doesn't no tech you can jump up to chase their tech. If you don't want this tech trap and would rather have more standard oki you can just ignore the ending 236A and take the knockdown off air throw.

Confirm into rekka, the string of normals before the rekka isn't super important, but you need to confirm that you're close enough for the rekka to connect.

236B will work when you push yourself out in the confirm, or if you just start a string far away.

Throw combo, use the whiff to make it easier to get the 3B to hit (don't forget that chaos code has an infinite buffer for held normals). Also, the first air series needs to be delayed a bit so that the opponent doesn't get floated too high for the rejump.

Corner only throw combo. The j.236A isn't needed, so just ignore it and go straight into airthrow if you didn't take that extra move.

Combo off DP. The situation may seem unlikely, but A DP will trade in a lot of situations and most trades will lead to this combo.

simple confirm into EX rekka, will carry to the corner and let the opponent air tech out.

after the super you can jump and input an air shuriken to meaty the opponent back into the corner.

for damage, it doesn't really matter what you start with, just know that you can cancel air shuriken into divekick super to kill for 2 bars 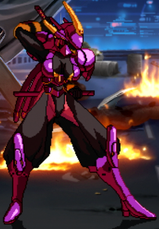 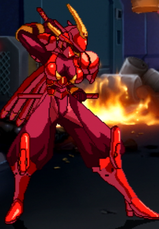 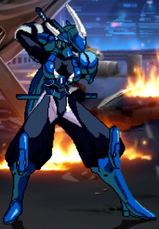 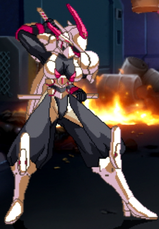 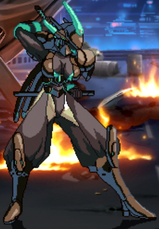 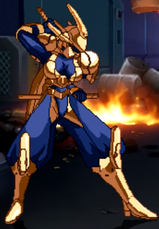 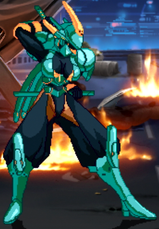 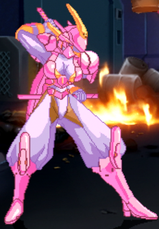