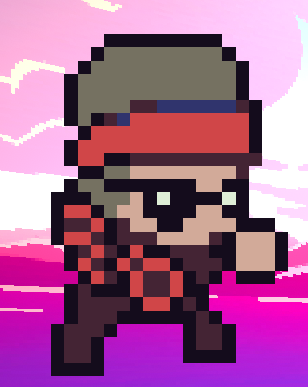 Brently on the character select screen

The main character of Combo Babies, Brentley. Described by the dev as "Some old dude who's still stuck in the disco era and entered a fighting game tournament", Brentley is the funky protagonist style character of the game.

In game, Brentley plays the shoto style archetype but with a more anime fighter feel. Replacing the old school fireball for a powerful divekick and a forward moving rush punch special, Brentley is great at staying in and dispensing mid pressure on the opponent. On the flipside, he has great wakeup tools and defensive options, and solid damage output given he has the meter. He doesn't stand out as the best at anything, but he gets to play the most solid and well rounded game of the cast.