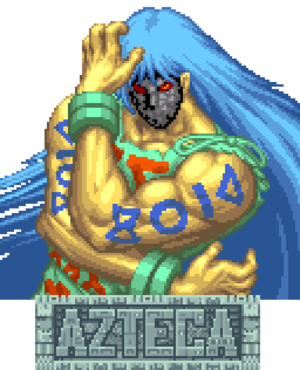 The penultimate boss of Kaiser Knuckle and walking jojo reference. Azteca is a tricky character and also has like 20 anti-airs.

2MK for knockdown, 2HP for damage/stun

Stuns everyone with 528 stun (Lihua) and below.

Does slightly more damage than above. Use for characters you can't stun.

Yeah, you get an extra hit if they’re cornered.

Stuns everyone, will redizzy characters with 512 stun or less.

The key to playing Azteca is to get your opponent to make the wrong reads and get smacked for it. You’re going to be jumping a lot, where you have access to good jump normals, air ball, and j.2KKK.
Poke with 5LP/2LP/2LK/6HK and 2146LP. The latter is Azteca’s largest and most rewarding poke. It grants you easy stun combos in the corner and solid damage midscreen. It’s +5 on block, so Azteca's slow normals actually allow him to frame trap, like 5MP/2MP/2MK.
On j.2KKK - it can not just cross up, but works as a counter to typical anti-airs. It’s very punishable on block, but not reactable in its own right. They have to make a read that Azteca is going to do it near the top of his jump arc, which means he can also empty jump low or throw. If they try to air-to-air instead, air ball will likely beat them to the punch.
Azteca can have problems closing the gap, since his walk speed is so slow. His best options for chasing someone down are both ground and air HP ball, but it’s fairly easy to stuff on its own.
Crossup setups come from most knockdowns, including: