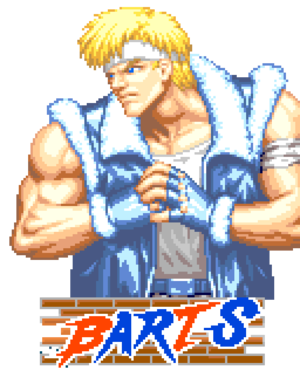 A biker who needs the prize money for his girlfriend's unspecified operation. Good guy Barts. In-game he's the Guile function of sorts (powerful charge fireball, flashkick AA, great set of normals including a sobat) though it isn't quite that simple due to his crazy mobility and sucky "flashkick". GO AHED

1-frame links for if you don't have charge

All 1-frame links besides n.5MK n.5MK/2MP. Takes slightly more time than this link to charge for [4]6LP, so do it after a jump-in or as a punish, maybe

Does more damage, but they can crouch [2]8K (except for Gonzales). Useful especially on crossup as they might not switch to crouch in time.

Works if you get both hits of j.46K midscreen, or even 1 hit in the corner. Good damaging ender if you can't stun them.

Can stun if you get the double-hit on j.46K, heavier [4]6P optimal. Depending on spacing, you can get land j.46K 3 times, which helps on characters with higher stun Example of j.46K(x3) stunning Lihua.

Stuns everyone. Example of stun on Gonzales.

Stuns everyone but Gonzales, doesn't work on Liza or Boggy. Inconsistent on Wulong, Lihua - 2MP whiffs earlier in his hitstun reel.

This combo stuns everyone. Spacing/timing can be finicky, since getting both hits of the spinning kick will cause the juggle to drop before it stuns.

This does the most damage post-stun, as Barts isn't able to redizzy. The last hit needs to be the initial hit of [2]8K, or you deal less damage.
See video above for other setups, although they do the same or barely more damage than HP throw.

Barts is a basic character with good pokes, a slow "sonic boom", and a great approach option in LP Thunder Knuckle. Being +3 on block makes it safe against guard cancels unless point-blank. Thunder Knuckle also has enough reach to beat 2LKs, causing character to use 5LP or commit to riskier pokes. You can take advantage of this by whiff punishing with 5MK/2HK or counterpoking with 5MP.

His low pokes are solid, more designed for counterpoking since he lacks confirms. For example, Barts 2MK beats Kazuya 2MK head-on. It's impossible to punish 2HK from max range, so it can be good to throw out as it's more rewarding. You can also abuse 2MK being plus on block to frame trap into itself or 2HK, or bait guard cancels.

Another tool in footsies is 6HK, which is a somewhat slow low crush that's safe on hit. While -9 on block, you can space this to be safe against guard cancels. However, it's not useful against slides (McCoy 2HK and Wulong 3HK) since they'll low profile it and hit Barts anyway. Since it has so much pushback on hit, you can use [2]8P or [4]6P

If you land 2HK up close, you can go for a j.HK crossup. In general j.HK is your best jump-in and can cross up. However, you can't land j.HK n.5HP due to the pushback, and other combos/blockstrings like n.5MK 2MP xx [4]6P are eaiser after j.LK/MK.

Round start [4]6LP can even lead into bigger confirms. At roundstart distance, you'll consistently land 1 hit of [4]6LP and juggle into j.46K with the wall. This is also known as the Bartman and can see use in combos, and works from raw [4]6LP from 5MK max range to 3/4 screen.

When Barts is at a long range you can charge Aura Cannon and use it to force an approach with [2]8HP's chip or follow [2]8LP in. If they try to jump, Barts has a few options, but he doesn't have an all-in-one anti-air like some characters. Since Moonsault Smash has little invincibility, it can lose to jump-ins. Instead, try to air-to-air with j8.MK or j8.HK, jump back HK if you want to make space. His n.5HP is also a really good anti-air, but it's not always available. Another typical trap is [2]8HP, [2]8LP, which allows you to anti-air with 5MP or just block.

If you trade with the late hits of Moonsault Smash, you can pick up a juggle with j.46K or j.HK jc j.HK. The former is more reliable, but does less damage unless you're close to the wall, while the latter is only possible if you start very close to them.

The important thing to remember is not to get too reliant on one move. Because of the slow startup, you can't use Aura Cannon too close or predictably. However, if you've pushed them out to a distance, it's good to alternate between [2]8P and your good pokes. For example, [2]8HP into [4]6LP is a frame trap that gives you good chip and is safe on block, allowing you to push on with 2MK/2HK, or bait and punish.

Instant Rolling Smash (input 486/469K or 446HK - 446LK/MK land before active) is a threatening low crush that grants you great corner carry and can convert to stun. It's generally unsafe on block, as they can interrupt the second hit with guard cancels or punish it if only the first hit connects.

Rolling Smash can cross up, though it's a little finicky. From a close 2HK you can do this, but there are other reliable setups.
Depending on proximity to the corner, you can throw with HP (facing corner) or MK/HK (away from corner), 5MK framekill (5MP vs Azteca), jump forward delay j.46LK. If you have the wall in front of you, Barts gets the same juggles off crossup Rolling Smash as he does on front hit.
If you omit the framekill, you can use j.46LK or MK to set up an ambiguous meaty on landing.

Barts is one of the characters who gets a little less off guard cancels than others. He can still use [2]8K in these situations, as a trade is usually good for him. Be careful not to keep holding up or you will get hit by multi-hit specials like McCoy's [4]6P.