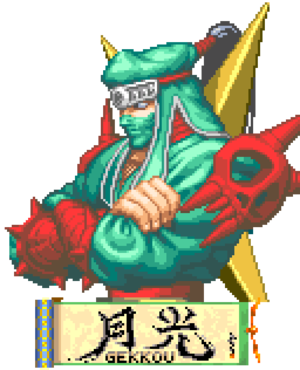 Asshole ninja guy who wants to be the top dog of his clan or whatever. Gekkou has a kit that allows him to go in as a setplay machine or run away to his heart's content. What more could you ask for in a ninja?

For a lot of combos, you can link into 2MK instead of canceling into tatsu. This is good to avoid pushing the opponent into the corner where you can't do 50/50s.

2LP 2MP is a 1-frame link, but the cancel is easier

Does more damage than n.5HP xx super, but you need to walk in closer

Naturally, you can combo 6HK into TK tatsu if you input 2148K/2149K. It's possible with any strength, but hard with j.214LK, sometimes whiffing entirely on Lihua and Wulong.
The following characters don't get hit by TK tatsu if hit by 6HK while crouching: Gekkou, Wulong, Lihua, Liza, J. McCoy.

Also works with other jump normals and air throws, but this does the most damage

Basic tatsu loop. Breaks wall at j8.HK xx 214MK, and Gekkou lands on the other side of the opponent for the j8.MK.
Stuns the whole cast due to j.896P’s incredible stun. You can use basically any air normals - lots of room to experiment.

Stuns characters with 512 stun and below.

You can start tatsu loops from this, too.

Gekkou has some incredible neutral buttons along with plenty of unique and annoying options. A double jump that he can use at any time (instead of just canceling air normals), an air fireball that can either stick in the ground as an active hitbox or roll along the ground, and a fast horizontal movement option in his air tatsu allow Gekkou to play on offense or defense.

His main weakness is his poor health/stun and lack of dedicated reversal move. He can throw or backdash on wakeup, otherwise he has to eat whatever meaty they put out.

Gekkou has some real open-world mixups with both versions of 214K. Any juggle with j.214K can go back into the mix with 2MK or j.321MP. It's a lot easier than going for the full tatsu loop against shorter characters like Wulong.

You can use 2MK to end juggles and go for mix with TK 214K as an alternative to j.321MP. video example.

Any crossup 214K gives you a knockdown long enough for you to walk up and easily time another ambiguous 214K crossup if you want to loop the 50/50.

if you delay it enough, j.214K can sometimes hit same side

Keep in mind the number of loops you can do based on your starter. If you start with j.214MK (2 hits) you have 4 more juggle hits (4 j.214LKs, 2 j.214MKs, etc.) and moves which reset don't count. Your best enders are either j.HK(x2) for more stun or n.5HP (walk forward) n.5HP for more damage. The latter reliably stuns <=512 characters but might fail for higher stun characters.

Example: You hit the juggle limit after 10 hits including the jump-in as seen here. The 11th hit will knock down in this combo.

It can be hard to do tatsu loops because of the side switch. You can use j.214LK and microwalk between each rep to keep going in the same direction. video example

Gekkou's special moves leave him with poor GC options unless he has DM. Sometimes you can get out of frame traps with 214K's low crush property, but it's usually not worth the risk.

Roundstart is important in this matchup. Main thing to watch out for is [4]64P or 2HK/3HK. You might be tempted to 2HP the latter since he steps into range, but that loses to slides. Instead, 5MK beats [4]64P and lets Gekkou block before slides reach him.

Gekkou 6HK can beat or be safe against slide. If you land while slide is active you can block, and it will catch McCoy's recovery if you time it right.

You can use 214K to punish the gap before the mash move's final hit, but watch out for trades which you'll lose. You can also beat it cleanly with 2HP.

For GC against [4]6LP, Gekkou will trade or lose with 214K, but DM is a reliable answer.