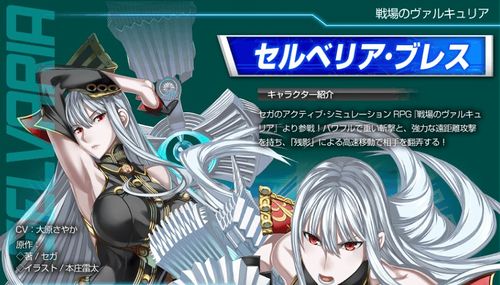 One of the Drei Stern and fiercely loyal to Maximillian. With the blood of ancient Valkyria and armed with her ragnite shield and lance, she is a warrior to be feared.

A guest character from the SEGA video game Valkyria Chronicles.

Selvaria is a heavy hitter character that oppresses her opponents with large normals into devastating damage. While not particularly quick, her teleports allow her to quickly traverse the battlefield and rush the opponent. Her 236X series has built-in teleport follow-ups and her 214X series are combo extenders as well as teleports with situational use and have a built-in high/low mix-up (214B/214C) to keep opponents on their toes. Unique to Selvaria is her 41236BC Climax Art has a surprise built-in homing function, meaning there is some potential to raw punish Blasts in this fashion.

Dokuro - Dokuro single handedly allows for Selvaria to go from "bad" tier to pretty good. 5S makes up for her lack of anti-air abilities + slow movement speed that hinders her from dashing under. The threat behind 5S in neutral is very explosive damage. Dokuro 5S is also a combo tool that she can meterlessly use allowing for some ridiculous 2-3 touch damage. Dokuro's low skill floor and strong synergy with Selvaria makes this assist the one.

Rusian - Rusian can easily overwhelm opponents with 6S Monster Train and completely control the pace of the match. During Monster Train, Selvaria can run her teleport mix-up game with relative safety. 5S is a counter move with a huge trigger box in case the foe gets a little too close.

Iriya - Fairly unexplored assist for Selvaria which challenges the traditional approach for her wincon. Not too much to say other than Selvaria's keepaway game with jC allows for her to protect iriya 5S and possibly get something going. Her (free space) in the combo Stuff > 214A > (free space) > 5B allows you to set 5S, possibly giving you some room to get creative.

Character Potential: Use 1 Trump Card for Support Cast Level 2 for 20 seconds. Can be activated once a round.

This section is dedicated to showing unique elements in a characters gameplan, not necessarily defining it entirely (ie. explaining how Selvaria might play around jC in neutral but not exactly what spacings to be at).

Neutral
To put it bluntly, Selvaria's neutral is very lackluster and as such I will be writing this with the belief that you are running Dokuro as it helps complete her kit. With that established your most important neutral tools to keep track of are jB, jC, Dokuro 5S, some 5B/2B, some jA, and some rare trump movement punishes.

jB
jB has a niche neutral use where it has the ability to cross-up and vertically hits the lowest of all your air normals. It is overshadowed overall by jC but has some ocassional use where you find yourself directly over your opponent and they are whiffing a button, trying to dash under, etc.

jC
jC is your most important air tool by far. You can use this move to steal space on a forward jump, as a cross-up tool, an air-to-air tool, to retreat and maintain pressure against antsy dash button opponents, the potential is endless. Selvaria has multiple ways to convert into this tool if it lands ATG. If an opponent tries to grounded anti-air this button, they risk being too early or even too late as its giant hitbox allows you to easily manipulate when you want to put it out. This versus most grounded AA options only having 2 active frames gives you lots of control.

Dokuro 5S
I don't really believe there's a wrong way to use Dokuro 5S, but something we have to keep in mind it is a huge part of Selvaria's combo theory as the meterless 5S extension grants her massive damage. However, in struggle match-ups where opponents are absolutely all over you this tool really comes in handy. Shizuo, Yuuki, Shana, and Asuna all will have to respect Selvaria despite their superior buttons due to Dokuro's threat. Learning to take advantage of the threat of Dokuro not being on cooldown and what to expect when opponents begin their approach because she's on cooldown are two of the most important parts of running Dokuro.

5B
This button is very situational. More specifically an anti-air for after you dash-under. If you try to use this move heads on vs jumping in opponents you are practically giving up the game as to position yourself in a spot where this 5B works well is a spacing that is easy for your opponent to manipulate. Read the Anti-Air Concepts below for a better idea on how to answer jumpy opponents.

2B
Selvaria 2B is one of my favorite buttons in the game. 2B is a far reaching low that is jump cancellable and converts easily into 5C/2C. It's recovery isn't high for a B normal and really helps Selvaria's lack of A normal usage in neutral. This move is great for pinning landing opponents, protecting your space, or even checking your opponent if they fall asleep at the wheel. Great for getting aggressive along with jC after you establish Dokuro 5S threat.

jA
Apart of Selvaria's AA concepts, jA is decent at swatting opponents out of the sky. As you lack a good grounded AA this is a move you will have to get comfortable with.

Anti-Air Concepts
Selvaria's AA game is going to be where new players struggle the most. A slow walk speed and mediocre grounded AA options mean learning to take full advantage of game mechanics and spacing will be the key to not getting bullied by Yuuki/Shizuo/Asuna jC xN. One concept is air buttons vs. Air pushblock (RG/Reflect Guard). When an opponent is very aggressive and Dokuro is on CD/you aren't ready to put her out, simply jumping with the intention of scouting (while blocking) is a great start. If an opponent also goes airborne and starts attacking, you have a few options. You can fall normally after airblocking, you can slightly delay a double jump to get above them, or air pushblock them to push them out. After getting a hold of your opponent's decision making in the air, you can confront them by angling yourself above them (ie. 7j8dj) and then fall with jC, do an 8/9jA if they're doing it super close, or even stay grounded and dashblock to get yourself under them. If you choose dashblock and you find yourself under the opponent, you can 5B them if they whiffed an air button, or wait out what we'll call a 50/50 where they either land (you wait to pin their landing) or they delay a doublejump to fall with a button (you wait to rising jA this on reaction). Finally, sometimes the best thing to do is to simply lame it out and 7j away with jC a bunch to test your opponent. If they get super aggressive we can dash-under/Dokuro 5S, do an early rising jC, or simply nothing after landing from a 7j and punish them for whiffing an air button. Sometimes the best thing to do in neutral is nothing at all!

Trump Card Use
While the main use of your trump card is for its explosive damage you get with 1 bar + Dokuro, ocassionally situations may arise where an opponent has burned their air options and you can tripguard them with it to win the round. There's also round 3 situations where you have two trump cards and can afford to use one this way. Although people burning their air options carelessly is common, this isn't always worth doing due to trump card scarcity and the higher reward as a combo ender.

Offense
Selvaria's offense in DFCI is very "vanilla" in that you are taking advantage of tickthrow with 5A/2A and looking to blow up bad pushblocks, defensive OSes, and aggression. 2B is a nice far hitting low and 5B moves you back in making it a great jump cancel option. Something to note is 2C is -11 making it extremely punishable and as such I encourage you to end your strings with 5C instead. Also note that Selvaria's teleport blaster gimmicks are indeed gimmicks and as such shouldn't be relied on unless covered by Iriya plate or Rusian or Dokuro cancel. jB/jC both have cross-up potential and jC lets you maintain pressure at a fairly safe space. However Selvaria's slow dash speed eliminates the ability to do a re-dash a button so you may want to be careful if Dokuro 5S is on cooldown as a redash attempt may get mashed or hit by a falling air button.

Defense
Selvaria's weakest area by far. Slow a buttons, slow movement speed, committal ground buttons with 5B being subpar. Your best bet is learning to take advantage of reflect guard, fuzzy jump, fuzzy superjump, and other defensive OSes. Selvaria jB can also be used as a fuzzy rising button to blow-up 4ABs, grab attempts, standing/air buttons etc. Of course, much like neutral, sometimes the best bet is to do nothing and let the pressure end itself.

236AB 5AB is significantly easier than going into 5AB off of either j236AB or 214AB, so you may want to do this route specifically for trump. It loses about 80 damage but gains a bit more carry and consistency.

Normal starter, no plate out