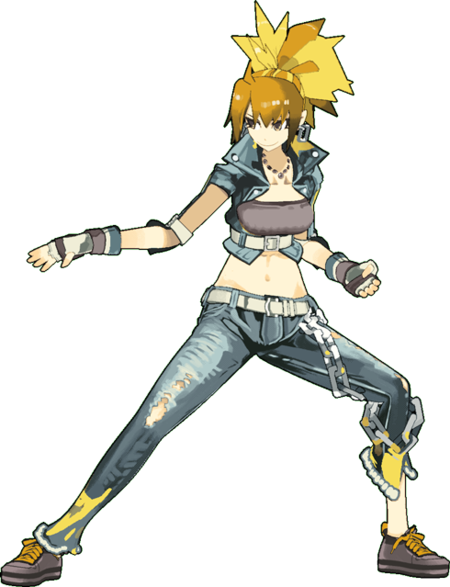 Then Akamine Tae is your choice.

Tae has a very extensive list of attacks she can perform. Jab strings, aerials based on the direction inputted, and even a throw with four different followups! The important part is that a large majority of her normals have upper/lower body invincibility tied to them. What this means is that you can beat aerial approaches with spinning kicks, stomp the ground to avoid lows, and even shoulder tackle through projectiles! The opponent has to think twice when facing against a character with a half-sized hurtbox on most of her actions. All of these attacks combined make for long blockstrings which can be extended by having a grenade out on the field. A grenade can either be detonated manually or after a set amount of time. She can also shift to mid-range pressure with her ranged gun specials that also work great as combo filler! 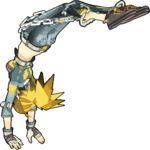 Backflip: Holding back while backdashing will cause Tae to do a backflip. This can be used as a secondary backdash without further lowering your Risk Gauge. The backflip however has no invulnerability.

Second Backflip: Continuing to hold back while backflipping will cause Tae to do ANOTHER backflip. This time she backflips into the air and no Risk Gauge is consumed on use. Just like the first backflip though, the second backflip isn't invincible.

Short Hop: Tae can short hop by inputting a high jump forward. She can only short hop forward, not backwards. Any move that is jump cancelable is also short hop cancelable. Short hop also hops over crouching opponents.