E's Laf++ is a five button fighter that uses numpad notation to explain moves and inputs like many other fighting games.

Specials and supers are either 236 (qcf) or 214 (qcb) motions. No need to worry about dp motions here!

If you're unfamiliar with the terminology used, check this out:

Walk: Holding forward or backwards makes your character walk. You will gradually gain meter if you walk towards the opponent.

Dash: Double tapping forward makes your character run at increased speed. You gain even more meter by running forward at the opponent.

Backdash: Tapping back twice will cause your character to do an invincible backdash starting on frame 2. Backdashing can be used as a way to make space between you and the opponent, or to get out of certain scenarios. Note that whenever you backdash, you lose one bar of Risk Gauge.

Jump: Pressing up makes you jump. Can jump straight upwards, or diagonally with up + forward or up + backwards.

Double Jump: Every character has access to a double jump which can go forward, backwards, or straight up. Use this to mixup your landing and bait out anti-air attacks! When double jumping behind your opponent, your character will turn around and face them.

High Jump: Pressing down before jumping up executes a higher than average super jump that can be done forward, backwards, or straight up. You'll know you got it right when your character has a blue silhouette on them in the air. You can still double jump or air dash after a high jump!

Air Dash: Tapping forward or backward twice in the air makes your character air dash based on the direction inputted. If you do a back air dash, you will lose one bar of Risk Gauge.

You can only either double jump or air dash while in the air. You cannot do both (unless you're Qdora or Saving Tina).

A, B, C, and D perform different attacks based on the button and direction pressed:

Pressing the correct attack button in combination with a direction input, your character will perform attacks with certain attributes. An example would be every character's Forward A (6A) granting upper body invincibility.

In E's Laf++, all special moves are executed by inputting either a quarter circle forward (236) or quarter circle back (214) in combination with an attack button. Specials vary greatly depending on the character. From projectiles, to lunging attacks, to grenades, and even pizza!

A majority of normals/command normals can be canceled into specials, which can extend pressure and combos!

By spending two bars of Action Gauge, your character can perform much stronger attacks with high bursts of damage. Most supers are invincible on startup, but are typically unsafe on block. On hit, the opponent is unable to use their burst, which makes supers great as guaranteed combo enders. Supers also ignore the armor from Tactical Guard.

Normals can be canceled into each other which is commonly known as Gatlings in other fighting games. A simple example is A to B to C to D (A > B > C > D).

Some moves won't be able to chain into others, more information can be found on the character pages.

Pressing A and B together (A+B) allows you to grab the opponent while they're blocking. By default you throw the opponent forward, but they can also be thrown backwards if you hold back while inputting A+B. Opponents can be thrown when they're in an armored state too, such as Tactical Guard or one of Alcott's many armored moves. An air throw can be done by pressing A+B while in the air.

Both ground and air throw is active on frame 1, as in your character will grab the exact moment A+B is pressed. Throw can be both a strong offensive tool when placed in a blockstring, or defensively to punish gaps in-between presure. Air throw is also a reliable anti-air tool against jumps-ins or forward air dashes. If your throw whiffs however, be prepared for big E's Laf++ counter hit damage. 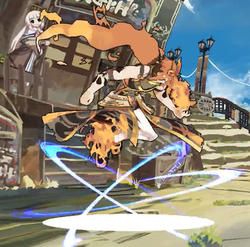 Upon landing from an opponent's attack, your character will automatically get back up based on the direction that was held.

Your character will hop off the ground and become invincible until they land back on the ground. 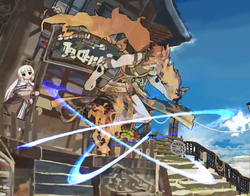 Upon getting launched into the air, some moves won't put you in enough hitstun to force a Ground Tech. This lets you tech early in the air automatically which can be influenced by a direction.

The options for air teching are:

Upon doing an Air Tech, your character will be invincible as shown by their transparent look. You will be invincible until you land to the ground. You can act out of this aerial invincibility and perform any air action, but doing so will make you vulnerable again.

Your character will be knocked to the ground, and Ground Tech will not be available. While on the ground, your character is vulnerable to getting hit before turning invincible during their getup animation.

Throws can be escaped by jumping, backdashing, or using a move that makes you airborne. If an attack and a throw collide on the same frame, the attacking player will always win this interaction. Certain attacks are "Throw Invincible" and cannot be thrown during their startup.

You can tech a throw by inputting throw the moment you've been grabbed. Both players will be knocked back and become invincible until they land back to the ground, both recovering at the same time. The window for teching a throw is 14 frames. Please note that you can only tech a normal ground/air throw. Command grabs such as Main's 214B cannot be teched whatsoever. 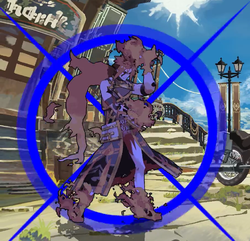 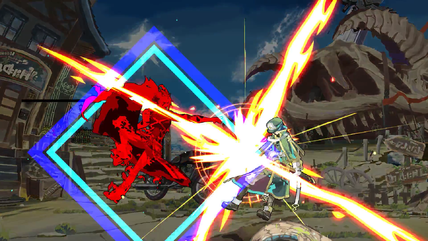 Pressing B+C together will cause your character to flash blue and armor incoming attacks and projectiles. On contact with an opponent's move, time will stop and your character will emit a blue blast that knocks the opponent back, dealing 800 damage. The great thing about Tactical Guard is that it protects you from highs, mids, lows, as well as cross-ups!

Although a free 800 damage parry sounds good, Tactical Guard is still vulnerable to getting grabbed as well as not being able to armor supers. The active frames for the armor don't last the entire animation either, which can lead to damaging counter hit punishes from patient players. The most important part too is that Tactical Guard armor doesn't start until frame 3, meaning fast attacks or attacks done immediately as your get up from the ground will stuff the Tactical Guard attempt.

The damage from Tactical Guard is non-lethal, as in it cannot KO. You still take chip damage from the parried attack, but no Risk Gauge damage will be dealt. 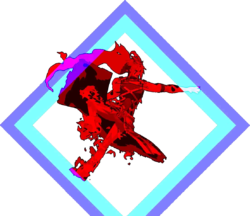 While stuck in blockstun, you can spend two bars of Action Gauge while inputting forward and B+C (6B+C) to emit an invincible blue blast (similar to Tactical Guard) that deals 800 recoverable damage. Guard Cancel can be used at any point in blockstun, even during a blockstring that keeps you locked into blocking. Guard Cancel helps you avoid blockstring mixup scenarios, as well as getting out of pressure in general.

Characters that are able to setup attacks on the opponent's knockdown don't have to worry about Tactical Guard/Guard Cancel since they're able to block while the opponent is forced to deal with their okizeme tools. Another option against Guard Cancel is to throw in a Tactical Guard cancel or an armored move (looking at you Alcott) during your pressure to make the opponent think twice of immediately hitting 6B+C.

The damage from Guard Cancel is non-lethal, as in it cannot KO. 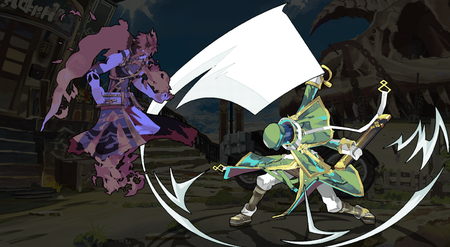 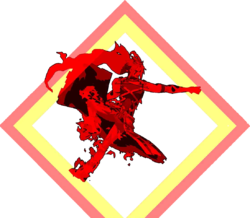 At the start of every round, both players will have access to a single use Burst action that can be performed by pressing A+B+C together when under the effects of hitstun. The Burst icon can be seen right next to the Action Gauge at the bottom. When getting combo'd, you can use your Burst to become invincible and knockback the opponent. This allows you to avoid dangerous combos and prevent the opponent from having advantage afterwards. In addition, a successful Burst gives you two bars of Action Gauge! Burst however is still vulnerable to getting hit by Fatal Shift actions, supers, and a Tactical Guard parry.

Normally, the blast from Burst launches the opponent back to fullscreen distance. If you have a bar of Action Gauge however, you can Fatal Shift your Burst which instead launches the opponent at about a quarter screen distance. Depending on the character and positioning, you'll even be able to start a combo from the Burst and turn the situation around in your favor! The drawback of this added benefit is that the time stop Fatal Shift causes gives the opponent more time to react and counterplay by performing a Fatal Shift, invincible super, or Tactical Guard.

Burst is temporarily disabled from being used when hit by a: 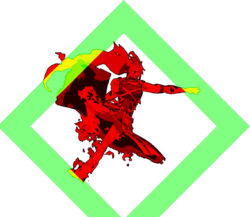 An alternate burst option that can be used while in a neutral state by spending one bar of Action Gauge and inputting down and B+C (2B+C). Performs an invincible blast that knocks the opponent away which deals 800 recoverable damage. Any special cancelable normal can be canceled into Counter Boost.

A universal DP of sorts that can used to prevent the opponent from rushing you down or setting up on you. Counter Boost gives you some space to reset neutral and get out of difficult situations. On a side note, Counter Boost's hitbox is smaller than Tactical Guard, Guard Cancel, and Burst. This makes Counter Boost more susceptible to being baited and whiff punished, on top of being -25 at best when blocked.

The damage from Counter Boost is non-lethal, as in it cannot KO.