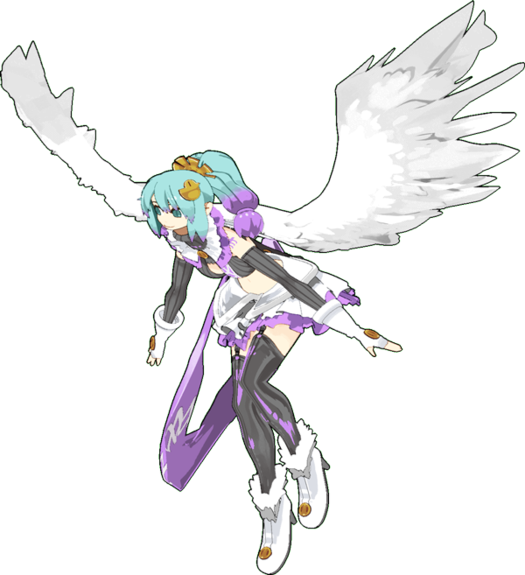 
Saving Tina is different than the rest of the cast, to say the least. On the ground, she has a strong overhead attack, an unblockable mist cloud that deals big chip damage, long reaching lows, and grounded/aerial traps for oki and coverage. But the real character is displayed once she's in the air. Saving Tina doesn't jump, but instead sprouts wings and flies! In the air, she has free movement both forward and back, as well as two different heights she can attack from. This is further complimented by the variety of strikes and projectiles she can perform in the air. A majority of them being air dash cancelable too!


Saving Tina has a secondary meter above the Action Gauge that indicates how much kg she currently has. Most of Saving Tina's moves consume kg in order to be performed. The Calorie Gauge goes from 40-44kg, meaning a maximum of 4kg can be stored (the remaining 80kg is flavor text). Saving Tina starts each round with 44kg, and the Calorie Gauge passively increases over time. Saving Tina can still perform universal mechanics such as Tactical Guard or Burst even when she's low on kg.


By high jumping, Saving Tina sprouts wings and flies! She can freely move to the left and right during this time. Flying is also greatly faster than Saving Tina's grounded mobility. Depending on the aerial move, Saving Tina either remains in the air or lands back down to the ground afterwards. While flying, Saving Tina is invulnerable to attacks that are "Jump Avoidable". This includes low hitting grounded moves such as sweeps. Jumping, air dashing, and certain actions will transition her out of flight.


Certain actions put Saving Tina into a flying state once the action is complete. Depending on the height, the advantage on hit/block will change based on how low she's flying.


Saving Tina can jump a total of four times! Each jump after the first requires .3kg to perform. 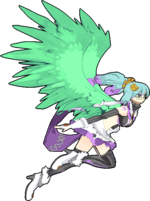 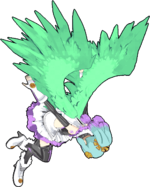 
Saving Tina can air dash as many times as she wants; both forward and back. Backwards air dash doesn't consume Risk Gauge on use. She can also cancel many of her aerials into air dash. Air dashing 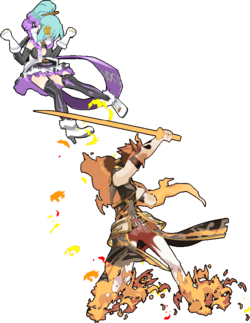 
While Saving Tina is fast and mobile while flying, she cannot air block during this time.


Saving Tina's Risk Gauge depletes when flying away from the opponent. The Risk Gauge can be decreased to 1% remaining, making the next blocked hit a guaranteed Guard Break on Saving Tina.