Each round starts with 99 seconds, and matches are played to a best of 3 rounds. The player who wins two rounds is declared the winner!

In the event of a timeout, the player with the higher percentage of health remaining will win the round.

When a draw occurs, both players will receive a round win but only if they didn't have one already. A match cannot end on a draw, therefore an additional round will be played until someone wins.

The gauge that shows how much remaining health a player has. If a player's health drops to zero, they lose the round.

There's no Guts system or health modifiers, which means damage dealt and taken will be constant regardless of the amount of health someone has.

Don't be deceived by the portion of health lost from the first combo that was dealt. Much like other fighting games, E's Laf++'s health bar lies about how much damage a combo actually does in terms of percentage to a character's total health. To put it simply, a 500 damage attack will take a good chunk out of a starting health bar, but the same 500 damage attack will shred off a couple pixels when the health bar is smaller. This is used to add dramatic effect to both the first and final hits of the round.

The Life Gauge indicates Its status with different colors:

Blocking any attack will result in chip damage being dealt. You cannot be KO'd by chip damage.

All chip damage taken is turned into recoverable (red) health. By not getting hit for 3 seconds, your recoverable health quickly restores over time. Blocking another attack will reset this timer.

The meter underneath your health that allows you to do defensive options, four bars total.

Blocking the opponent's attacks will decrease your Risk Gauge with each blocked hit. When blocking multiple attacks in a blockstring, all attacks after the first will have reduced Risk Gauge damage. If the Risk Gauge is fully depleted, your character will be in a stunned state and be unable to act for a short time. 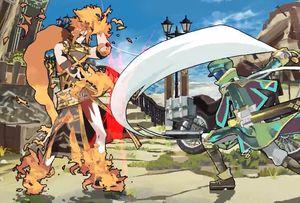 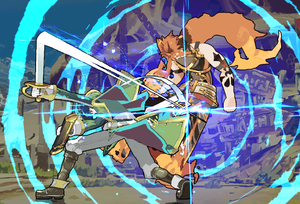 Sometimes you'll see your guard flash red instead of the normal green color when blocking attacks, this is called Fatal Guard.

Fatal Guard is a mechanic that punishes buffering attacks while stuck in a blockstring. If the blocking player inputs an attack during a blockstring that has no gaps, the next blocked attack will deal an additional one bar of Risk Gauge damage. Fatal Guard has a cooldown of 30 frames before it can happen again.

Fatal Guard forces the player on defense to think twice before mashing 5A or DP, and to respect the opponent's pressure. Timing your reversals and paying attention to the opponent's strings lets you bypass this mechanic entirely without ever having to worry about an empty Risk Gauge.

If you block an attack while your Risk Gauge is low enough, your character's guard will be broken and you will be unable to act for a short time. While stunned, the next attack you take will be a guaranteed counter hit for the opponent.

Once the Guard Break occurs, your Risk Gauge will be restored back to full.

The meter at the bottom of the screen that lets you perform special actions, can gain a maximum of four bars.

Each character gains a different amount of meter. This applies to meter that's given passively over time, while walking, or running.

After spending meter, the Action Gauge will darken for 5.5 seconds which reduces the amount of meter you gain. Any remaining Action Gauge at the end of the round does not carry over to the next round. 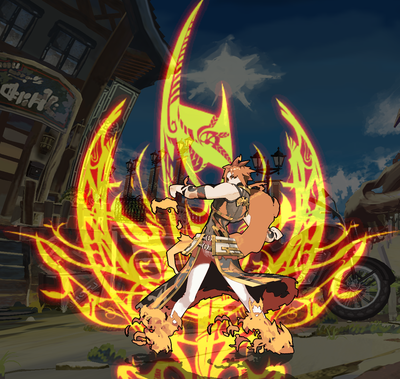 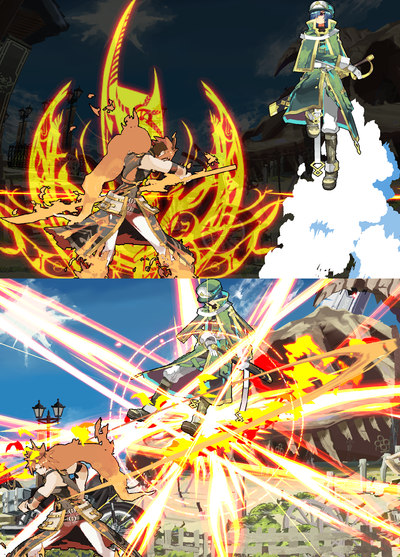 Spending one bar of Action Gauge and pressing/holding the Fatal Shift button (F) in combination with a move input gives you an enhanced version of that move.

The universal effect of Fatal Shift is increased hitstun, blockstun, and invincibility starting on frame 3 of the move's startup animation. Fatal Shift also forces a counter hit even if the opponent was in a neutral state. Getting hit by or blocking a Fatal Shifted attack decreases the Risk Gauge by one bar.

On hit or block, a Fatal Shifted move can be canceled into different actions. These include:

This opens up for unlimited potential in pressure and combos! Each individual hit of a multi-hit move that has been Fatal Shifted can be canceled.

Air Dash can also be Fatal Shift canceled into:

One restriction for Fatal Shift is that you cannot cancel into throw or air throw. Certain moves will have their attributes changed when Fatal Shifted. Check out the character pages for more info!

When a Fatal Shift occurs, the screen darkens and time briefly stops. During this time, a Fatal Shifted move can be canceled into another move. This new move will now be the Fatal Shift action once time resumes. This form of canceling is called Fatal Connection. A practical use of Fatal Connection would be if Main Fatal Shifted 5D, but once time stops he sees the opponent jump. Main can then cancel his Fatal Shift 5D into a 6D and anti-air them! This is only the surface level of what Fatal Connection can actually do. Fatal Shifting moves with momentum lets you transfer that move's momentum to the new move you're canceling into. With one bar you can turn a simple move into a mobility tool, fullscreen approach, or crazy mixup.

Same rule applies to Fatal Connection. You can cancel your Fatal Shift action into anything, but throw.

At the bottom of the Combo Counter, a blue bar represents the amount of hitstun the opponent has before they're able to act again. The hitstun from attacks carry over when combining multiple moves together.

For example, Main's c.B cannot normally combo into 6C because there isn't enough hitstun. But by doing 5A > c.B > 6C, all the hits connect because of the added hitstun from the 5A!

With this, new combo routes can be made by linking attacks that normally don't combo into each other.

Using the same attack in a combo consecutively will result in less damage. Experiment and think of new ways to piece your combo together to deal the most damage possible!

Hitting the opponent during the startup/recovery of their move or throw will result in a counter hit. A counter hit gives additional hitstun, damage, and new properties such as ground bounce. There is a 5% increase in damage on counter hit.

Your attacks deal additional damage when the opponent is in the air. This includes if the character was jumping or was launched by an attack. The additional damage is different based on the move, but Its roughly a 20% increase in damage.

When strikes from both players collide with one another, the screen flashes and both players recover on the same frame. During this flash, you can cancel into any action similar to Fatal Shift.