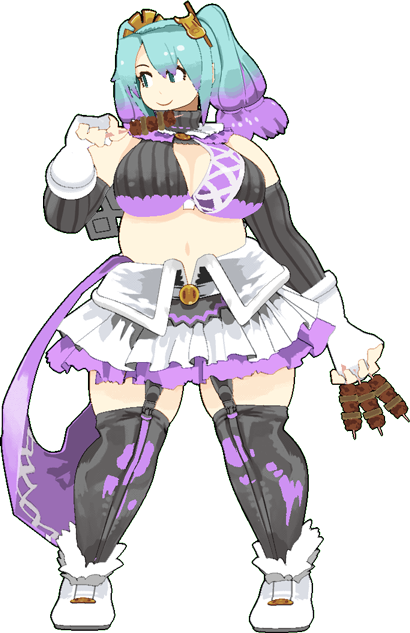 
As the resident zoner, Tina's gameplan revolves around filling the screen with projectiles that limit the opponent's movement options. This forces the opponent to play at her pace rather than approaching carelessly. Being able to create shields that erase projectiles as well as simply jabbing projectiles out of existence, Tina has answers in both neutral and whenever the opponent thinks they can out-zone her. While she doesn't have mixup potential, just having the opponent block a couple attacks causes a large amount of chip damage to rack up. All it takes afterwards is one correct play to have all of their recoverable health fade away!

Tina's potential only shines though when her secondary meter (the kg Meter) isn't empty. The majority of Tina's options consume kg upon use. Having 0kg means you're stuck with only a jab, an anti-air, and throw. Resource management and knowing when/where to use your moves is the key to success with Tina!

kg Meter: Tina has a secondary meter above the Action Gauge that indicates how much kg she currently has. Most of Tina's moves consume kg in order to be performed. The kg Meter goes from 80-100kg, meaning a maximum of 20kg can be stored (the remaining 80kg is flavor text). Tina starts each round with 88kg, and the kg Meter passively increases over time. The main way to gain kg is to use 214B (+12kg) or 214C (+20kg). If Tina doesn't have at least 4kg, she can only do:

Tina can still perform universal mechanics such as Tactical Guard or Burst even when she's low on kg.

Kebab: After walking a certain amount of distance, Tina will eat a kebab and gain 1kg.

kg While Being Attacked: Tina's kg Meter increases whenever she's in hitstun or knocked down.

Fatigue: If Tina runs for too long, she starts running slower and eventually becomes tired. Tina then loses 4kg and is temporarily unable to act.

Increased Recoverable Health Damage: Whenever Tina hits the opponent, they lose a maximum of 300 recoverable health in comparison to the standard 150 everyone else does.

Setup Concepts and 6A Pressure