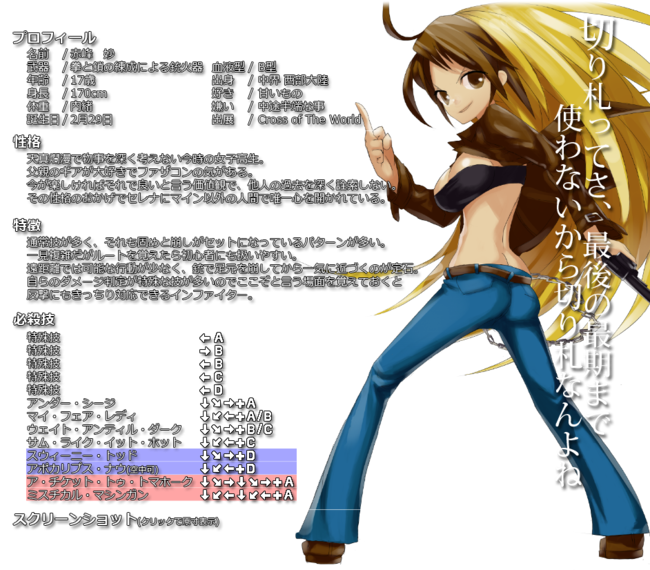 Tae is a rushdown character with a good set of specials and normals to make her being in your face a nightmare. Decked out with fearsome oki, high damage and some good ways to open up the opponent. She suffers from the normal things that rushdown, short-ranged characters do, and that's lack of range. She's easily put at bay by characters like Cecil or Main with range or projectiles that can keep her on the other side of the screen or just out of her reach.

-Pros-
+ Fast normals
+ Great rushdown abilities
+ Solid damage anywhere and amazing damage with meter in the corner.
+ Oki is monstrous. Once you get an opponent in the corner, it should always be your turn and you likely won't get out unless they guess correctly.
+ Very good corner carry even meterless
+ Pretty strong mix-up
+ Good health (Over 9k)

-Cons-
-Many of her normals are unsafe on block
-Lacks any real way to fight zoning
-No meterless reversal
-Most normals lack any range to them.
-4B Overhead cannot be chained into from any of her normals
-Most combos rely on meter to deal high damage.
-Tae's meter gain is horrible to the point she'll likely only gain one bar a round.