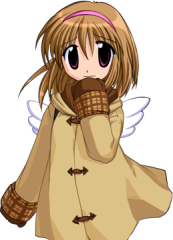 Tsukimiya Ayu (月宮 あゆ) is a very mobile character with great damage and mixups. She has access to a hover dash, two air dashes, and the ability to control her airborne momentum and direction with the S button. On the ground, Ayu excels when up close to the opponent, but suffers from lack of ranged options. Ayu has a number of tools to keep herself next to the opponent, but she also has the tools to keep opponents at bay, including a traditional DP and the surprisingly good EX taiyaki. When she gets a knockdown, Ayu can exploit her pseudo-flight to create an extremely hard to see 5 way mixup, which leads back into itself after dealing a generous amount of damage. Ayu also boasts a very different hurtbox than other characters while being comboed, requiring the opponent to have trained Ayu-specific combos in advance. Ayu allegedly has the most reversals out of the entire cast.

Ayu is the main heroine of Kanon, a visual novel produced by Key in 1999. Ayu is a strange girl that bumps into Yuuichi on his first day back in town. She loves eating taiyaki, is prone to saying "Uguu" when irritated, and generally acts quite childish for her age. During Kanon, Ayu becomes fast friends with Yuuichi and reveals that she is constantly searching for something, but cannot remember when she lost it or even what that something was...

BGM: The Town of Sunshine (日溜まりの街)

The special move data table can be found under Ayu Tsukimiya/Move Data.

Ayu's high tier comes from several different things, two of which are her extremely hard to see mixups, and her ability to end a round in two combos, both from 2A starters. Below is an example of a two combo kill.

Ayu will want to change up her combos depending on meter available and location in order to make use of her jS flight for mixups. Some examples below.

Note 2: The timing of 98 will vary greatly depending on character wakeup speeds. For example, against Nagamori you must input 98 as quickly as possible, while against Kano you must delay the 8 greatly.

If the opponent techs after your djB in most corner combos, you will want to press jC upon seeing it. Since you are holding forward after djB, this will result in a throw. Even if you see nothing, you will want to press jC near the ground, as the opponent can tech late, making it very hard to react to. If the opponent techs late enough, jC will come out instead of a throw, and will hit the opponent in their 15f window of defenselessness. Ayu has one of the easiest times punishing both early techs and non-techs, as the followup to a late tech (jC hit land jB) uses the same inputs as a non-tech. The following combo is the basic tech punish. 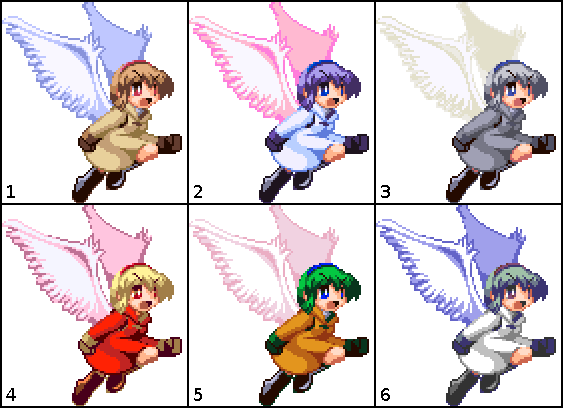