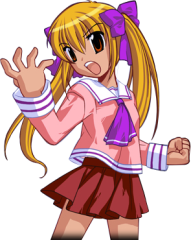 Doppel Nanase (ドッペル七瀬) is a high damage grappler – the only one in the game. She is also the only character with techable throws. Her command throw has three stages; at each stage, she can choose either A or B, and if the opponent guesses the correct button, they will tech out of her throw taking no damage for that stage. On the other hand, if she lands all three stages, she deals massive damage. She may also choose to do no follow-up for a little bit of guaranteed damage. She is essentially Rumi without a sword with some buffed normals and access to different specials.

Doppel Nanase is an original creation of Eternal Fighter Zero.

The special move data table can be found under Doppel Nanase/Move Data.

For starters, let's make something clear - Doppel does not play like a traditional grappler. Her 41236A command grab is next to useless, her 41236B anti-air looking grab will whiff most of the time if you use it outside combos, her 41236C is her only useful command grab which you'll be using instead of your normal ground throw. All possible followups to her 41236* command grabs have a 50/50 chance to be teched, almost for free. If the opponent successfully techs a followup, they'll jump into the air creating a scramble situation, causing Doppel to lose her okizeme opportunities (which she strives off). It's still worth going for the command grab followups occasionally to keep your opponent on their toes, but being aware of their huge downsides is crucial. Doppel instead focuses on using her strong normals to try and fish for one knockdown into looping okizeme. She also has access to some strong pressure strings which open up plenty of tick throw opportunities.

Doppel has access to a decent amount of pressure sustain with her dash normals and obnoxiously huge hitboxes. 662A and 662B is your tool to get back in their face when you're pushed out by pushback, but you don't always want to do use this, especially when you're in the corner. When you've cornered the opponent, you can stay at an ideal distance and harrass with f5B, 2B, 6C, 214A/B. If the opponent becomes overly respectful, you can begin to dash in 41236C as a mixup.

Doppel has a nasty okizeme game anywhere on the screen. If you can space her 6C knockdowns well midscreen, you'll get very hard to see 669 jC left/right/high/lows. In the corner, Doppel ends with 6C 41236B to leave a gap in the corner, letting her get even nastier corner setups.

Doppel makes use of wallbounce loops for the majority of her corner juggles. The core of the juggles can be summarised as: 6C IC [66C 662A(whiff) c5B]xN, how many reps you can get depends heavily on your starter and the amount of Blue IC used.

You can find visual examples of these setups here. 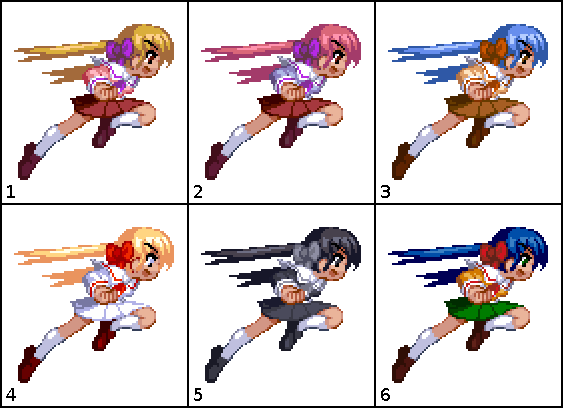