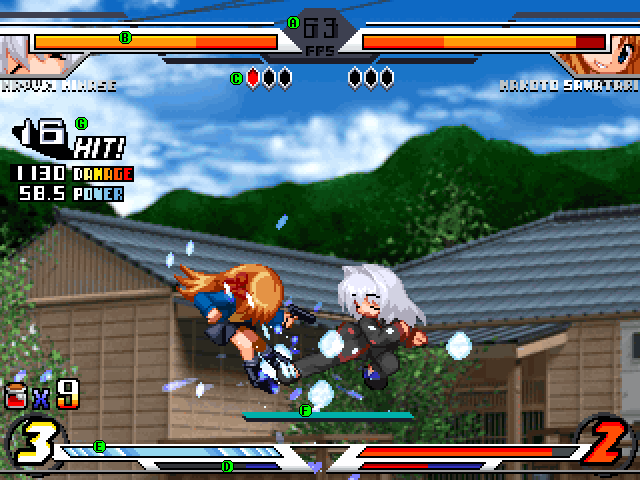 Displays the number of Frames Per Second the game is currently running at. The normal value is 64.

Displays the amount of remaining life for the players 1 and 2 respectively. With default settings, both players start out each round with 10,000 life. Once a player's life gauge is empty, they are "down" and the opponent's win count will be incremented by 1. Chip damage can bring one's life to "zero vital", but chip damage will not defeat the player. Only a direct hit will cause a player to lose the round.

Displays the number of rounds won. Once a player's win count reaches the maximum number required, that player wins the match.

Used to power Instant Charge and Reinforce Attacks. It has three distinct stages which it cycles through:

Displays the character's SP. The number beside the gauge and the color of the gauge represent the number of SP Levels currently available to the player. SP is gained by attacking or being attacked by the opponent, and is consumed by performing advanced moves, called Eterny Specials. Therefore, you will not be able to perform those moves if you do not have sufficient SP. Also, the maximum SP Level is 3.

Typically when the opponent is launched into the air, this coloured bar appears below them. This quickly-decreasing bar dictates how long the opponent can be juggled without being able to do anything about it. Every hit on the opponent will extend the timer for a certain amount. Once the bar depletes the opponent will be safe from any further attacks, and the opponent can then choose to either fall safely to the ground in a knockdown state, or perform an air recovery to regain control quicker. However, there are certain moves which do not display a stun gauge and still allow the opponent to be juggled.

These 3 readouts don't appear unless you hit the opponent more than one time without letting them return to neutral stance, go into a downed state, or tech.

Some characters have a special display added to the HUD when used. these will appear either above the special meter or under the health bar, on the corresponding character's side of the screen. this can be seen as Mio's current range mode, nayukia's jam, or a slave-character's usage bar.

The following choices are available to you from the title screen:

The following choices are available after you select a replay slot.

The following choices are available to you in the option screen: