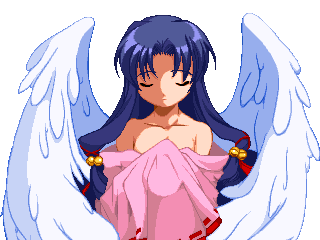 Kannabi no Mikoto (神奈備命) is a insanely powerful and quick character, and uses her divine powers to crush her opponents. She acts as the true final boss of Eternal Fighter Zero. Because her playable version is unmodified from her boss version (unlike UNKNOWN), she is completely unbalanced and inherently stronger than every other playable character in the game. Kanna is normally banned from tournament play.

Kanna is a key character in AIR, a visual novel produced by Key in 2000. She lived back in the 10th century, and was one of the last of the winged race in history. Because of the awesome power inherent in all their kind, Kanna was revered as a god, and isolated from the populace out of fear. Despite being moved from temple to temple constantly throughout her life, Kanna was eventually able to became close friends with 2 of her followers, the servant Uraha and the lieutenant Ryuuya. During AIR, Kanna escapes her temple with Uraha and Ryuuya and goes on a long and arduous journey in order to find her mother, with all of Japan searching for her...

The special move table can be found under Kanna/Move Data.

Kanna has not been tuned from her boss form, meaning she has extremely overtuned normals and abilities. She is banned in tournaments and will often be looked down upon in casuals. Make sure to confirm with your opponent if they will play against a Kanna.

The metagame beside, Kanna in general gets to play her game whenever she wants. All of her specials are useful and spammable, though 41236 is more useful than the others. She has plenty of time on each hit to confirm into a full combo.

Because she has no throw, she must get her opportunities from her mixup game, which is extremely strong. Her dash puts her airborne immediately and allows you to overhead very quickly and confirm into a ground combo. If that's not fast enough, instant jBC will work on all characters and with IC, you can jBC 5BC etc. to continue your combo. 2B is her best low option, and comes out as fast as her overheads.

Kanna does not have level 1 or 2 specials; each super takes all 3 bars. Feel free to toss in j236236B whenever you need a big chunk of damage in a combo. 236236A is not very useful. It is slow and the opponent can block with plenty of time. You can combo into it with 236C BIC 236236A, but in general it is not worth it. 236236B is good damage from a grounded combo, and a very good reversal. 236236C will get you banned from Twitch and Youtube, probably. Excellent damage for a comeback win.

Kanna also has a bug in her back jump animation (7 on the control stick), where, for one frame, she can cancel into a grounded normal. TAS combos use this liberally to combo 5B into 5B or 5C into 5C. You can attempt to learn this but it's realistically impossible to consistently get in matches.

Besides doing damage, Kanna has extreme mobility with her flight ability. It takes getting used to, but you can be anywhere you want very quickly by stringing together her flight dashes. 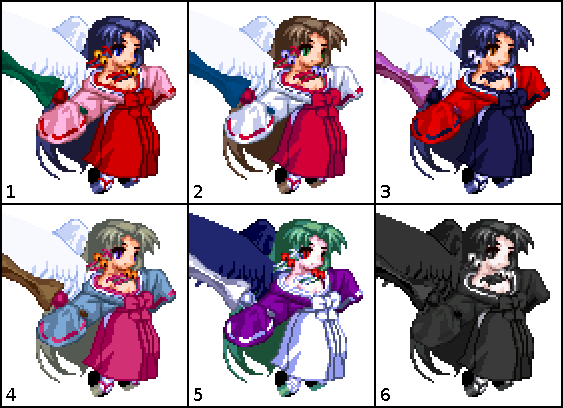