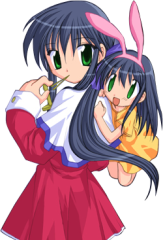 Kawasumi Mai (川澄 舞) is a sword character with a ghost assist, a mix between Eddie and Johnny from Guilty Gear. She has very strong lockdown and control over the match once she gains momentum; Mai will utilise the ghost assists to zone, to cover gaps in blockstrings, and to create mixup opportunities. This ghost has a cool down below Mai’s health bar and needs time to regenerate. If the ghost is hit by the opponent, the regeneration takes longer. Most of Mai’s sword moves have a hurtbox and terrible recovery on whiff, so she is a lot weaker without the ghost covering her.

Mai is one of the heroines of Kanon, a visual novel produced by Key in 1999. She is close friends with Sayuri Kurata.

The normal move table can be found under Mai Kawasumi/Move Data.

The special move table can be found under Mai Kawasumi/Move Data.

Mai's moves have big hitboxes in both vertical and horizontal directions, which makes her able to outrange most attacks. However, her moves also have big hurtboxes and long recovery, which forces Mai into a tight corner if the moves are RGed or read by the opponent.

Mini Mai can also act when Mai is not blocking and her moves also have big hitboxes, but can be easily killed without considering the position and timing to summon her.

Without exaggeration, it will be the most important task for the Mai player to complement each other to control the match, including neutral and corner.

Mai has to play defensively in many cases if Charge Gauge is cooling down, even with Red IC.

Distance close enough to hit the opponent with 5A is considered close range.

Distance close enough to hit the opponent with f5B/2B/5C is considered as middle range.

Distance close enough to hit the opponent with 2C/6* is considered long range.

Distance too far to hit the opponent with 2C/6* is considered out of range.

More Pressure than a Honey Bear

When Mai has the initiative, you can go for her high-low mixup, which mainly consists of her 2A for low attacks, and her Tiger Knee'd "Lonely Moon" move (6239A) for a high attack. The Lonely Moon has a lot of recovery if blocked, but you can hinder the opponent from taking advantage by either using Mini Mai to cover you, or with an IC. After an IC, you can continue your mind games by either immediately attacking with jA a high attack, wait for your character to land before using 2A for a low attack, air dashing forward for a split-second before using jA, or landing and throwing the opponent.

Because Mai's pressure increases so much while she has Awakened, the opponent may tend to block a lot more. If you sense the pressure invading the opponent's mind, you can try quickly teleporting in with a normal Ground Fold, then going straight into the "Heart that accepted everything"-grab FM. 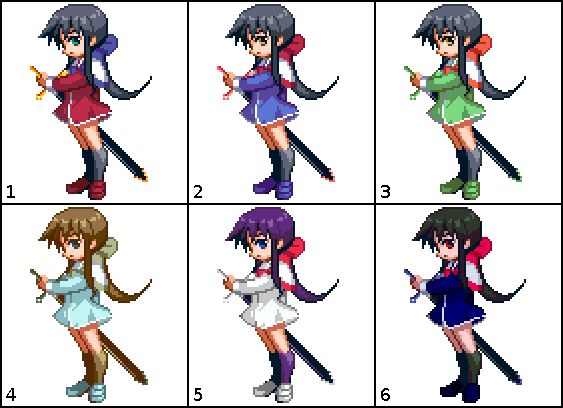