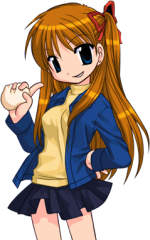 Sawatari Makoto (沢渡 真琴) is a tricky fighter, using many traps and bullets to both zone and pressure her opponents. While her normal combos are fairly weak, she gets most of her damage from her very strong mixup game. On knockdown, she can set a variety of very long lasting, high priority moves, such as a smoke bomb or a ricocheting bullet. This allows her to choose high/low or right/left mixups while ensuring she has the advantage, even on block. Good use of EX moves allow her to not only reset the fight to neutral, but often take the advantage. Her weaknesses include relatively low damage without the use of meter, very short ranged normals, and her awkward airdash.

Makoto is one of the heroines of Kanon, a visual novel produced by Key in 1999. She is a mysterious girl who lost her memory of everything except her hatred towards Yuiichi. The Minase family decides to let her stay in their house until she regains her memories. Makoto really enjoys reading manga, eating pork-filled meat buns, and playing tricks on Yuiichi. During Kanon, Yuiichi vaguely remembers that they had met before in the past, but as he gets closer to the truth, Makoto's health begins to deteriorate quickly...

BGM: the fox and the grapes

The normal move data table can be found under Makoto Sawatari/Move Data.

The special move data table can be found under Makoto Sawatari/Move Data.

Makoto is a very momentum-based character. Her short-ranged normals, low damage output and slow and punishable projectile moves make it difficult for her to gain the advantage in a neutral situation, but after she manages to score a knockdown, she'll be free to set up various forms of okizeme that leave the opponent with no good options on wakeup. Because of this, she often prefers lower damage combos if those guarantee a knockdown, and uses her RF meter on EX bullet, ICing her normals and traps, or anything else to keep her pressure going instead of saving it for a high damage combo.

When attempting an attack, her main plan is to use bullets and traps as cover, as her normals are usually outclassed by all other characters in a fair 1-on-1 fight. After scoring a hit, she should always go for the knockdown and prepare for a new oki with high/low or left/right mixups while keeping herself safe from reversals. Getting the opponent to block the traps opens them up for mixups with high/low attacks, throws and so on.

On defense, she shouldn't be afraid to use the resources available to her to turn the tables, even if that means sacrificing both super and RF meter in the process. When harassed at a longer range, her only feasible option out of reversal supers is often 623A, which is very unsafe when blocked. On the positive side, her 623B gives her great protection against aerial approaches, so the greatest danger usually comes from the opponent's ground moves. If the opponent doesn't realize this, she should be able to escape their pressure with relative ease.

If you find yourself in a neutral situation, you're already at a disadvantage. Avoid approaching without projectile cover, try to score knockdowns, always set up something for oki and don't be afraid to use your resources to gain the upper hand. 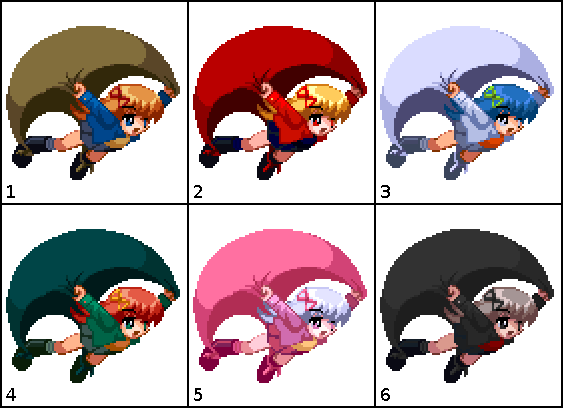