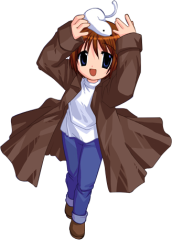 Shiina Mayu (椎名 繭) is a close range, highly mobile rushdown character with a hop instead of a dash. Once Mayu has the opponent cornered, she can run high/low mixups all day, while threatening with her assortment of command grabs. Mayu’s weakest when she is not in the opponent’s face, but she does have an incredible amount of ways to force herself in. Mayu has quite possibly the most frustrating hurtbox in the game. Her normals are also extremely frustrating, as they have upper/lower body invulnerability, and are very hard to beat or punish.

Mayu is one of the heroines of ONE, a visual novel produced by Tactics in 1998. Mayu first met Kouhei soon after losing her only friend, her ferret Myu. She quickly becomes attached to Kouhei, but acts on instinct all of the time. Mayu becomes a problem child who starts to say the name of her ferret all the time. However, Kouhei believes that Mayu will eventually learn to cope with her loss. Although Myu died, Mayu's journey to adulthood started from that point. During ONE, Kouhei starts to "look after" Mayu before he realizes it, to at least prevent her from getting into trouble...

Stage: Behind the School (学校裏)

BGM: White as the snow (雪のように白く)

The normal move data table can be found under Mayu Shiina/Move Data.

The special move data table can be found under Mayu Shiina/Move Data.

As Mayu, your main goal is to brute force yourself into your opponents face and stay there as long as possible. What you lack in a standing overhead you gain in lots of normals that move you forward, exceptionally silly invincibility on various normals and a low invincible hop dash to stay in your opponents face. Even outside of pressuring your opponent, you have moves like 5C that act as a surprisingly effective preemptive poke, 3 different low risk anti airs with f.5B, 5B and 6B, a nigh impossible to punish air unblockable meterless DP - the list goes on. All in all, Mayu players will be looking to abuse fantastic normals and exceptional mobility to frustrate the opponent to no end!

From a 2C knockdown that leaves you right next to the opponent, you have enough time to j9 j8 right above the opponent and do a 4-way high/low left/right mixup. Making use of normals on the way down from the j8 to help mask which side you'll land and whether you'll hit high or land into low is crucial.

Works on characters who do not have fast wakeup. This safe jump setup is brutal due to j236C which delays Mayu's landing and has a small amount of invulnerability beating delayed mash and a fair few reversals.

Mayu is one of the few characters capable of crossing up opponents who are directly in the corner with no gap. A correctly timed 214C wall grab as the opponent is waking up will force the opponent out of the corner slightly, allowing Mayu to do the A divekick followup for a left/right. This setup also frequently stuffs reversals. The only requirement is red IC to capitalise on a hit or to make it safe if blocked.

Mayu has a surprising amount of layers to her pressure for a character who seems fairly straight forward at first glance. A lot of Mayu's strength comes from how obnoxious her pressure is, how she has high/low profiling on a lot of normals, and how on top of this she can create mixups after extremely common pressure string pieces.

2C has an insanely long cancel window. You can abuse this by mixing up when you cancel into the low invulnerable 623A, which will catch any punish attempts if timed correctly or allow you to IC and into a mixup if not. You'll only ever do this if you have red IC for a conversion or to make it safe, even if 623A can be hard to punish you'll likely lose your turn without IC.

623A, when IC'd, keeps some of the 623A momentum and makes Mayu land quite quickly if you don't press any normals or air dash. This is where the mixup comes in. You can 623A IC into air normals (like jAAB), do nothing and immediately land and 2A, air dash and jBC, late air dash (although it's only a slight delay) to make them think you're going low but stay high... honestly this setup is disgusting. Not only do you use a low invulnerable, air unblockable, 9F startup move that easily converts into high damage off IC, you also get a mixup if it's blocked and you have IC in stock (which you always will if you use this).

Same idea as 623A IC, except this plays off whether you use the divekick ~A followup from 236A~B or not. This divekick can be significantly delayed and can work as a frame trap, made especially more potent with IC to make it safe or to convert into juggles. Once you've conditioned your opponent to respect this option, you can create a mix up opportunity by ICing the 236A~B ball bounce into jump normals, landing low, immediate airdash high, immediate airdash land low, delayed airdash high, delayed airdash low... and this all works because the opponent WILL over respect Mayu's pressure. She gets far too much mileage if they don't. 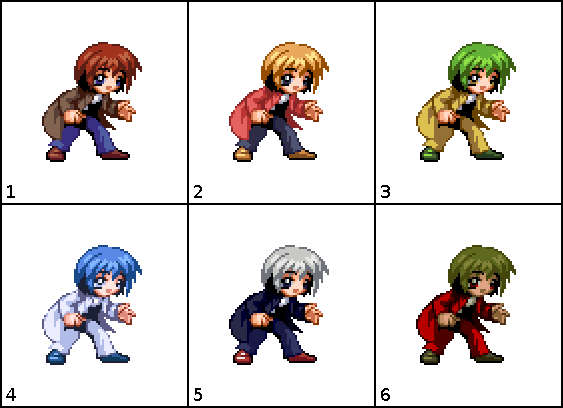