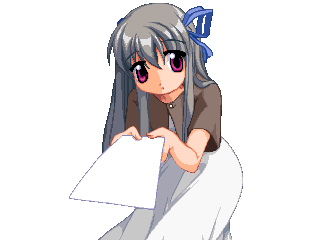 Tohno Minagi (遠野 美凪) is an assist character, utilizing Michiru to help lock down her opponents. Minagi has very few special moves herself, as most of her special inputs direct Michiru to perform an action. She may also press the special button to move Michiru left or right (4S or 6S) or to change her stance (5S). Normally, Michiru will follow Minagi around the screen, but when in her other stance, she stands in place, ready to perform upgraded specials. The combination of long lasting Michiru moves and Minagi’s normals allow the pair to safely mix up the opponent. Minagi has many drawbacks, including weak A and B normals, lacking reversals without meter, and Michiru being unavailable for several seconds if hit.

The special move table can be found under Minagi Tohno/Move Data.

A fair number of Minagi's normals actually have really good frame data, but due to their short reach or awkward hitboxes, are not as useful as they could be. You'll have to play around these shortcomings by using stance cancels and Michiru specials to lock down the opponent and run your mixup game. Michiru's positioning will also become extremely important during the course of the match. Finally, Minagi's mixups are quite good and fairly safe due to Minagi's ability to block during Michiru's attacks. A short insight on each of these items is presented below.

Minagi can make use of Michiru's ready/unready ability to effectively stance cancel her normals. This both changes Michiru's state as well as cutting the recovery of her normals to 17f, the recovery from readying Michiru. This makes a blocked 5C(1), 2C, or 662C safe while still applying pressure. This becomes unsafe if the button before stance canceling is RGed, so varying your timing and which normal you stance cancel on will become extremely important to surviving and keeping your lockdown going.

By abusing Minagi's ability to stance cancel, and the great frame data on Michiru's specials, you can keep the opponent locked down for an extended amount of time. For example, you can 662BD 5C(1) D 662CD 5C(1) 236B IAD jAAAA... and continue on pressuring even further. Learn how to vary whether to stance cancel and use a Michiru special to keep the opponent guessing and preventing them from escaping your lockdown. It is also best if you learn how to convert off the random hits you may get during lockdown. There is no timer, so keeping the opponent blocking is only so helpful; you must get damage in somewhere to win the game.

A good Minagi can work around any of Michiru's positionings, but a great Minagi will be able to manipulate her position with far less effort. Knowing how far 236 and 214 will move Michiru, where she likes to position herself after correcting for long distances, and how far 4D and 6D move her will allow you to choose the correct positioning for the situation.

Against characters with better normals, reach, or positioning, you will ideally want to place Michiru further away from you, and allow the opponent to close the distance. Since Michiru cannot be hit until she performs a special, the opponent will have to pass her and be vulnerable to any moves from behind. Ready her up at a good distance and either 236B or 236C when the opponent aproaches. 236C will give you plenty of time to confirm a hit, even if the opponent hit you first. From here you are free to set up Michiru for okizeme.

If the opponent must approach from the air (Akiko, Ayu, Neyu) you can place Michiru closer, ready her, and use 421 as a homing antiair that you can combo from. Minagi does not have any good normals for antiairs other than 662C, so either moving around to avoid air approaches or using Michiru are your only good/safe options. 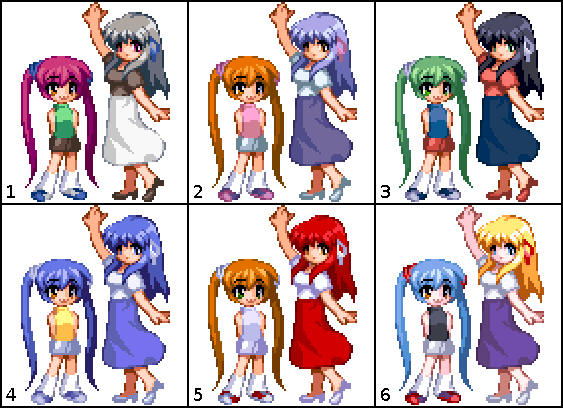