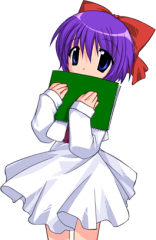 Kouzuki Mio (上月 澪) is two characters packed into one, and can switch between 2 stances, close range and long range mode. Both stances have their own normals, specials, supers and even movement options. In her close range stance, Mio is an excellent in-fighter, with great normals, fast movement, many mixup options and a large array of reversals. In her long range stance, she becomes arguably the strongest zoner in the game, with ridiculous dhalsim style normals that can chain into each other and space control specials that can even overwhelm the other zoning specialists. The stance switching itself is extremely strong too, being fast to the point where she can gain frame advantage by cancelling moves into it. Her only real weakness is her lack of strong reversal option once she gets cornered in long range mode, which can easily take her from a full life lead to a loss against characters with strong offense. While her lack of zoning moves in close range mode might be a weakness in theory, it only comes up in a handful of scenarios in practice.

Mio is one of the heroines of ONE, a visual novel produced by Tactics in 1998. Mio is a 1st grade student in the same school as Kouhei. She always carries a sketchbook with her since she is mute. Also, her face expresses a lot of emotion, so you can easily tell how she is feeling just from looking. During ONE, Kouhei helps Mio with the theater club, and ends up remembering something that he'd long since forgotten...

The normal move table can be found under Mio Kouzuki/Move Data.

The special move table can be found under Mio Kouzuki/Move Data.

The normal move table can be found under Mio Kouzuki/Move Data.

The special move table can be found under Mio Kouzuki/Move Data.

Staying on the ground to attack is the best option in most cases. Her jump/air dashing normals can be beat out by a lot of things since they lack range. As far as ground attacks go, rushing with 2A and 5A's until you hit and link into a combo is probably your best bet. Another fairly good rush in would be 662C, you can cancel this into 623A/B, even on block, which can be good if you opponent doesn't know there is a followup. If you don't follow it up with a twirl, there's a ton of recovery time. On hit, you can IC into the air loop mentioned earlier, or link into Mio's 214214 super.

j.C can put your opponent in a good stunblock thuogh which may give you advantage and allow you to follow up with grounded normals. It also provides a good crossup, which you can use for okizeme. For example, as they wake up, j.C crossup over them, then jump back j.C again to put em in block then follow with grounded normals. If you hit a deep j.C, you can link Mio's BnB combo with it, or 236A which you can then IC into an aerial loop.

j.2C can be a good quick overhead if you're close to your opponent. The startup can be pretty easy to see if you do it far away. You'll almost always want to IC this. If blocked, the recovery is horrid, so you'll want to get out of that, but if it hits, it can lead to a pretty strong air loop.

Mio having access to both Short Range (SR) and Long Range (LR) modes essentially makes her two characters in one, adding the fact she can switch between these modes mid combo means she has many more combo options to choose from than the rest of the cast. Players must be able to choose the correct combo options for the situation without hesitation to prevent dropped combos and less than satisfactory enders, making this a double edged sword.

Mio players will find themselves making on the spot decisions and improvising combo sections frequently. A major feature of hers is the ability to efficiently carry the opponent to the corner using her stance cancels. Out of the entire cast, Mio is possibly the best suited to EFZ's free-form combo system.

Mio has the ability to use LR 66C and SR 5C to wallbounce an aerial opponent and further extend her combos. This is an important part of her combos.

In both modes, Mio's ability to carry the opponent to the corner is very high, any hit can lead to corner carries and you'll likely be using LR 66C or SR 5C at least once to achieve this.

The features of each mode are as follows:

Okizeme using SR j2C and 236236A need RIC. 236236A also needs 1 super stock. Mio will make a lot of her combo decisions based around whether she has access to RIC in order to followup with this type of okizeme. If she has BIC in stock, Mio also has options to convert into higher damage routes if the player believes they can secure the kill.

As previously mentioned, Mio has a strong capability to carry to the corner. This means that your combo recipes will center around corner combo ender setups, whether they be tech punish setups or knockdowns.

SR 236236A and LR 214214A are both untechable. LR j2C is difficult to tech. As long as you remember these combo ender options, you shouldn't have much trouble.

If there is no other option but to go for a tech trap midscreen, it will be a j6C tech trap like other characters. This option is not recommended due to her other better methods.

LR ender. One of Mio's easier enders, it is recommended to learn this one first. Hitting the opponent with j2C secures the knockdown, meaning you can choose this option and not worry about a tech trap. This option is great damage for when you have no supers in stock. This combo ender only works at above approximately 51.5% power. If the power is lower than this, you can skip some normals. For example: jB jC [j8 or j9] jA j2C

One of Mio's SR enders. This ender is ideal for following up with 236236A okizeme. 5AxN is roughly 5. You're able to adjust the opponent's juggle height by adding delays between these 5As, and from c5B onwards inputting as fast as possible. For the dj6C(whiff) tech trap, you'll want to input it shortly after you start coming down from your double jump. You should be aiming to enter j6C just after the opponent techs. Adjusting the height with 5As is imporant to ensure this tech trap while also maintaining some damage, giving you more time for the 236236A oki setup, allowing for more items to be summoned.

Another SR ender. 236A~236A causes a knockdown with a gap in the corner, opening up more ways to mixup your opponent. One downside is the damage is lower than the previous options and there is less time to set up okizeme. This setup is particularly hard on Unknown, her small juggle hurtbox makes height adjustment difficult.

j236236A is techable, so this is mainly used as a higher damage option to secure kills at the end of matches.

Use this ender when you think you might not be able to reach the corner. 214214A is untechable, deals decent damage and often stalls time enough to get RIC back. If you think you can secure the kill with a bit more damage, use 214214B/C.

SR 214214A is also untechable. It may feel wasteful using this as a combo ender considering the cost effectiveness, but it's still much better than allowing your opponent to tech and run away, so it's an important option to remember.

This ender is also used as a last resort in other combos where the opponent is too high to convert from. One example is the 2B(1) (f5B) 5C juggle described earlier.

There are still okizeme options for this in SR mode, so let's push the wasteful nature of this ender to the backs of our mind.

This ender is used if the opponent is too low after her typical LR mode corner carry combo: [jA jB j66]x2 jA .. jB

Mio lands first and raises the opponent's juggle height using 662C allowing her to combo into 214214A. The number of hits of 662C depends on how low the opponent is, as you're trying to position the opponent to be hit optimally by all the projectiles in 214214A.

These parts are used to carry the opponent nearer to the corner.

Proration limit: Power needs to be over 75.1% when the first jB hits.

This is the most useful juggle for Mio, so this should be highest priority to learn. Pay close attention to the proration limit. If you have extra proration to spend, you can do jB j66 jB c5B jB j66 jBC.

An option for strange combo starters. It's important to consider how you're going to land from this, in some cases a delay between jB and jC may be necessary.

Combos for converting from jA air-to-airs and tech traps. This is an important component to keep in mind to make the most of jA confirms, which is typically hard to combo from. djB djB is a link that opens up better combo options.

This is an alternative to jB j66 jBC. Especially useful for situations where jB may not hit or if you need to adjust the opponent's height higher. Against Mai, this version is essential after j2C RIC.

Corner carry combo piece for when you're in Long Range mode.

The jB should hit just before landing.

Allows you to push the opponent with your air dash and use less proration. Carries for a similar distance as jB j66 jBC. While it is mainly used for BIC, it can still be used for certain RIC starters, so keep this option in mind to maximise distance carried and damage.

Editor note: Keeping until overhaul has been completed. Still useful.

Her air combo is pretty much (Short Range) [jump] j.B [airdash] j.BC [land] 5B(c). This combo can either lead into Mio's 2B 5C corner loop, or can be repeated again to push them closer towards the corners.

A simple yet damaging Long Range combo: (Long Range, close) 5ABC 412A IC 214214A. Higher levels of the Ciel super can be used instead for increased damage.