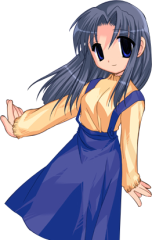 Kawana Misaki (川名 みさき) is one of the more straightforward characters in the game, with some strong but very linear frame traps, which lead into very high damage combos. Inspired by Geese Howard, she possesses Reppukens, counters, and multiple moves with autoguard to bully her way in. While her mixup game is fairly weak by EFZ standards, any stray hit can lead to massive damage into reversal safe oki using her Down Burst super. To complement her frame traps, she possesses high damage command throw supers, which vacuum opponents attempting to escape them.

Misaki is one of the heroines of ONE, a visual novel produced by Tactics in 1998. She is a 3rd grade student in the same school as Kouhei. A girl with cold eyes but a warm smile, Misaki became blind due to an event that occured in the past. She enjoys talking to others since that is the only way she can get to know other people. Kouhei first met her on the roof of the school during sunset. During ONE, Misaki and Kouhei spend some time together, but there is an eternity, after all...

Misaki stands out amongst the cast as having what may be the absolute highest damage potential in the game. Her speed lends itself well to this fact, and although she doesn't have the fastest normals in the game, most of her moves are not particularly slow. With excellent far reaching dashes, decent pressure options, great combo tools, generous amounts of autoguard, terrifying damage and the like, Misaki may very well be the stuff comebacks are made of.

Getting the opportunities for that damage, however, require a little more work to obtain. Misaki has an extremely limited high/low mixup, since she has no grounded overheads. Even though she has very useful oki options and plenty of cross up material, Misaki has surprisingly little mixup to work with against a cornered opponent, which is exactly where you would like to end up getting them to pull out your merciless damage potential. Additionally, while Misaki has many great ground-to-ground, air-to-ground, and anti-air options, she has nearly nothing in terms of air-to-air. All of her jumping normals only hit below her, and your only options to compensate for that are laggy or cost meter.

Overall, Misaki will thrive in the hands of players capable of getting in on opponents, and comfortable with staying there. Two combos may be all you need to take victory, and Misaki has every tool you'll need to pull them off.

The normal move table can be found under Misaki Kawana/Move Data.

Misaki is a simple character, yet extremely effective at what she can do. Her normals are all excellent in different ways, her dashing attacks have great frame advantage that let you keep your turn forever (until they RG), and she can burst a huge chunk of damage off almost any confirm. She is one of the few characters that can use guard meter effectively, and gets good damage for it. She has a potent reversal option in 214B, due to its odd hurtbox; characters that can't hit high enough to stop this move will have a very hard time keeping their turn. Her main weakness is her mixup game, as the only one you'll always have available is her strike/throw option, which is powerful in its own right. She also has some trouble threatening space that's not right next to her. Her reppukens are okay, and her f5B/66B are fantastic, but you leave yourself open against characters with better normals. Her most powerful option in neutral may be her 2C IC, which can lead into great damage, but will lose you your RF meter if blocked. Misaki tends to have to choose between keeping her RF meter to build for a big BIC combo or to use it offensively to fish for hits more often.

Misaki has a great non-metered reversal in 214B, but opponents that know how to stuff the move can make Misaki take much higher risks than normal, so against better opponents you may need to rely on reading the opponent to find an opening to escape.

Any one of these followups can end in j214C instead.

This particular combo is character specific (works on Mio and Kaori, for example), but is high damage.

All the advanced combos above use OTG ( off the ground ). You can use these moves to OTG your opponent :

The above are the usual pick ups, but 2C, 214B, and TK j214C can also be used against some characters. 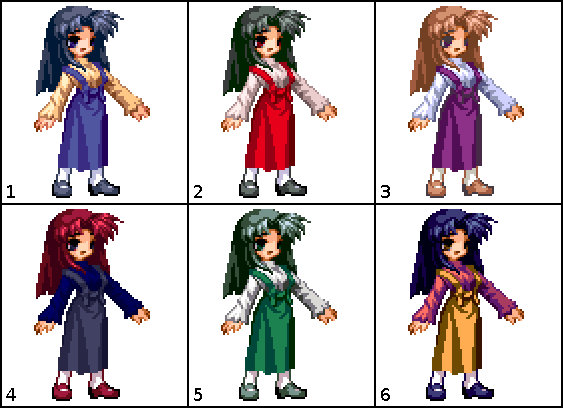