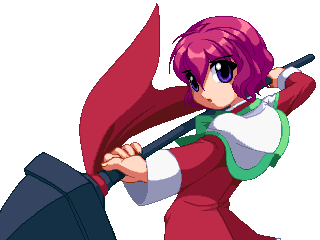 Amano Mishio (天野 美汐) has the slowest walk/dash in the game, but makes up for it with how strong she is in every other aspect. She has the best mid range normals in the game and is one of the few characters with a fully invincible, meterless dragon punch. Her defining characteristic is her element system: while she starts out fairly weak with only one special, the dragon punch, landing it randomly assigns her one of two elements: fire or lightning. Each element gives her access to new specials, with lightning specials focusing on space control, while fire specials grant her massive damage potential. Some of the elemental moves consume the element and put her back in her weak elementless state, forcing her to connect with 623* again. You can however IC the skills to keep the element.

Mishio is a supporting character of Kanon, a visual novel produced by Key in 1999. She is a first-year student at the high school that Yuiichi attends. She acts cold and unfriendly, and scares away her classmates. However, Yuiichi discovers that she seems to know a lot more about Makoto than she should be able to know. During Kanon, when Makoto's condition worsens and Yuiichi confronts Mishio, she warns him about his future and what it means for a "miracle" to be realized...

Mishio has one of the slowest walk movements in the game, and her dash movement is not much better. She makes up for this by having some of the best normals in the game, in terms of hitboxes vs. hurtboxes. Her two elements accentuate her gameplay in different ways, with lightning leading to a more defensive, neutral based game, and fire leading to a more offensive, burst-damage style.

A good Mishio will be able to seamlessly switch between the two elements as needed, and be able to adapt to whatever RNG throws at them. Knowing good element switch combos (doing a move that loses your element in the middle of a combo, and ending that same combo with an elementless DP) will be the difference between an okay Mishio and a great Mishio.

She also boasts perhaps the best set of reversals in the game, with fully invulnerable DPs in two of her modes. Beyond that, all of her specials and supers serve a purpose, with none being entirely useless, save for her FM.

5B and jB. You could boil down her basic neutral gameplan to these two buttons and you wouldn't be far off the mark. Ridiculously good hitboxes, almost no hurtbox past her hand, and with good reactions, you can convert 5B into full combos in lightning, and jB into a full combo in any element. Her c5B and 5C are also excellent antiairs and can challenge even the best air buttons, with conversions into a full combo. Her element specific tools include an extremely active field of damage in lightning 623B, and in fire, the only movement ability Mishio has: fire 236B.

Lightning is Mishio's defensive/neutral based element. She has a couple of notable specials, one being 623B as explained in the previous section. This section lists the others.

Fire is Mishio's offensive element. She has a couple of notable command normals and specials to take note of, including a meterless launcher.

Mishio's 623 series are arguably the best reversals in the game. With non-elemntal DPs having massive amounts of invulnerability, and fire's being completely safe with IC, the opponent often has a really hard time pinning down Mishio. Conversely, her lightning DPs are nothing special, and have no invulnerability, leaving her very susceptible to pressure and mixups.

Mishio doesn't have the best mixup game, relying more on her superior pokes and ability to convert most hits into major damage. Lightning uses IC with her various set up specials to create left/right/high mixups, while fire pressures the opponent into not pressing a button to beat her slower mixups. 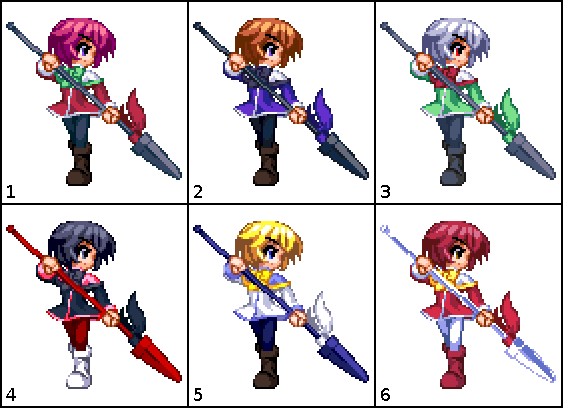